It's been a tough year for international investors so far in 2018. Few countries have managed to match the returns of the S&P 500 in the U.S., due to a combination of geopolitical and macroeconomic factors, along with a strong U.S. dollar against many major foreign currencies. For investors in exchange-traded funds, finding single-country ETFs with positive returns has been a challenge.

However, there are a few countries that have managed to thrive even in a difficult environment. Let's take a closer look at iShares MSCI Israel (NYSEMKT:EIS), Global X MSCI Norway (NYSEMKT:NORW), and iShares MSCI Saudi Arabia (NYSEMKT:KSA), which are the best performers so far this year among single-country ETFs with more than $100 million in assets under management.

Strength in the Middle East

What's notable about this list of three single-country ETFs is that two of the most important economies in the Middle East are represented. The Israel ETF tops the list, and although a 13% gain might not seem like much, it's impressive in the current environment.

The iShares ETF shows the breadth of Israel's economy. Two companies that are well-known to U.S. investors, Teva Pharmaceutical Industries and Check Point Software Technologies, dominate the fund, combining to make up almost 30% of the ETF's assets. But you'll also find some high-flying smaller technology players, along with exposure to Israel financial institutions and a host of other sectors. With the tech boom lifting stocks across the globe, Israel has benefited greatly from its outsized exposure to the industry. 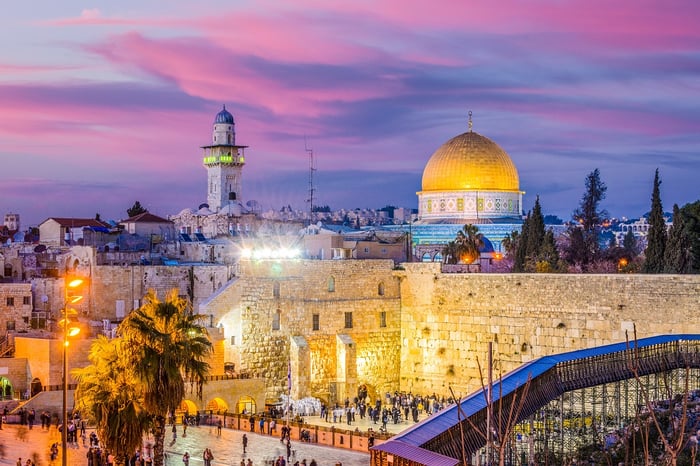 Farther south, the Saudi Arabia ETF is even more surprising to investors because of its almost complete lack of direct exposure to the energy sector. Most of the kingdom's energy enterprises are state-owned and unavailable to investors. Instead, three-quarters of the fund's assets are invested in financials and materials stocks, with powerhouses Saudi Basic Industries and Al Rajhi Bank having 16% and 12% allocations within the ETF, respectively. Obviously, banking institutions have substantial indirect exposure to energy, but Saudi Arabia has also worked hard to try to diversify its economic exposure and find ways to plan for a future in which its vast oil resources will be depleted.

Looking to the land of the midnight sun

Far from the warm waters of the Mediterranean and Red Seas, Norway has also managed to buck the trend toward poor-performing stock markets in 2018. The nation is heavily dependent on oil and natural gas resources in the North Sea, with energy stocks making up nearly a third of the ETF's assets. Yet even though Norway's energy stocks have done well this year, some of its most impressive performers have been in the consumer area, especially among seafood producers.

Like Saudi Arabia, Norway is working to evolve beyond its fossil fuel dependence, and energy giant Statoil recently changed its name to Equinor to de-emphasize its oil origins. The company has built massive offshore wind farms as part of its push toward renewable energy, and with energy-hungry consumers both domestically and across Europe, Equinor could help lead Norway and the Global X ETF's returns higher for the foreseeable future.

What's next for these ETFs?

Even with solid gains so far in 2018, these ETFs have plenty of promise left for the future. Israel's technology emphasis arguably gives it the best prospects for gains, but renewable energy could also be a pioneering influence for Saudi Arabia and Norway as well.