Social media is eating up more and more of our attention everyday. Where once we might call or -- gasp -- talk face-to-face with one another, we now rely on a few social media giants to connect us. At the forefront of that trend are Facebook (NASDAQ:FB) -- which also owns WhatsApp and Instagram -- and Twitter (NYSE:TWTR).

Neither stock has been a great investment lately. Of course, long-term Facebook investors have little to complain about, as the stock has almost quadrupled in the past five years. And even Twitter investors have seen their shares triple in value between June 2017 and July 2018.

And yet, since this summer's high, these two are down an average of 30%. That leads to an obvious question: Is either of these two stocks a good buy today? And if so, which one is better? 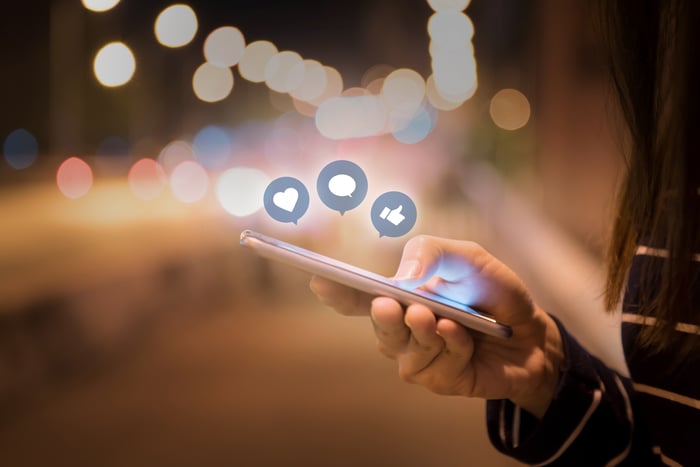 Obviously, that's not a question we can answer with 100% certainty. But if we examine the question through three different lenses, I believe we can quickly see which is the better bet.

First, we will evaluate the financial fortitude of each company. We do this to see what would happen if there were a financial crisis right now. Obviously, the likelihood of that happening is small, but the consequences could be enormous.

Given that both companies rely almost exclusively on advertising dollars, any change to the emerging digital market would have wide-ranging implications for both companies. What we want to know is this: Would either company fold under that stress, would they stay the same, or could they actually benefit -- over the long-run -- from a downturn?

You might be wondering: How could anyone benefit from a downturn? The answer: by buying back shares on the cheap, acquiring start-ups at discounts, or simply offering their goods -- in this case, advertising -- for less than their competitors to drive them out of the market.

Keeping in mind that Facebook is valued at over twenty times the value of Twitter, here's how they stack up.

Both companies have solid balance sheets and cash flows, but there's a clear winner: Facebook. While Twitter's debt load isn't that concerning given that a good chunk of it is in the form of low-rate, senior convertible notes, it does limit the company's flexibility to act if opportunities present themselves in times of crisis.

With absolutely no long-term debt, on the other hand, Facebook would significantly benefit from a downturn. While the Cambridge Analytica scandal and the specter of government oversight might prevent Facebook from making big acquisitions, it could easily buy back shares if they suddenly started trading at a significant discount.

Next we have to look at valuation. Facebook is a $470 billion behemoth, versus Twitter's much more modest $20 billion market cap.

But here again Facebook looks like the better bet. Part of this is due to the fact that Twitter is spending more to help drive user growth, while Facebook is more of a well-oiled advertising machine. But even so, Facebook trades at a not-insignificant discount to Twitter on every metric but one (price-to-sales).

Finally, we have the most important factor to consider: sustainable competitive advantages, sometimes referred to as a company's "moat". For both companies, the key moat comes from the network effect -- as more people join each platform, it becomes more valuable. Intuitively, this makes sense: Who would want to be on a social media platform that no one else was on?

While there have been rumblings about millennials deleting their Facebook apps in droves, it's important to remember that the company is more than a one-trick pony. It also owns WhatsApp and Instagram, and is just starting to scratch the surface of monetizing those two. As it is, monthly active users (MAUs) currently sits at 2.23 billion, a figure that grew 11% from the prior-year quarter.

Twitter investors would give their left arm for growth numbers like that. As it sits right now, the platform has actually lost MAUs, though part of that has to do with the company's purge of fraudulent accounts. Even so, growth was tepid at best when compared to Facebook's, even before the most recent quarter.

Trends like that make it obvious that Facebook -- thanks in large part to its ownership of Instagram and WhatsApp -- has a network effect with more staying power than Twitter's.

So there you have it: Facebook is the better bet on every facet. It has a stronger balance sheet, more favorable valuation, and -- most importantly -- a wider moat. But it's worth saying this doesn't mean I'm bearish on Twitter. In fact, I own both companies in my real-life portfolio -- though Facebook comprises 6% of my family's holdings, while Twitter has a more modest 3% allocation.

If you're looking to invest in social media stocks, I think both are worthy of your attention; but if forced to choose just one, Facebook is the better bet today.