Amazon.com (NASDAQ:AMZN) is now the third-largest digital ad sales platform in the U.S. -- behind Alphabet (NASDAQ:GOOG) (NASDAQ:GOOGL) and Facebook (NASDAQ:FB) -- according to new data from eMarketer. The e-commerce company is expected to take 4.1% of U.S. digital ad spending this year, amounting to $4.61 billion in ad sales. This puts the online retail giant ahead of Oath (a Verizon subsidiary) and Microsoft for the first time.

The company's climb up the advertising ladder this year has a very small asterisk next to it, as eMarketer said, "It's important to note that much of that growth is thanks to an accounting change Amazon made that affected estimates for 2018 and later, leading to the growth spike this year." 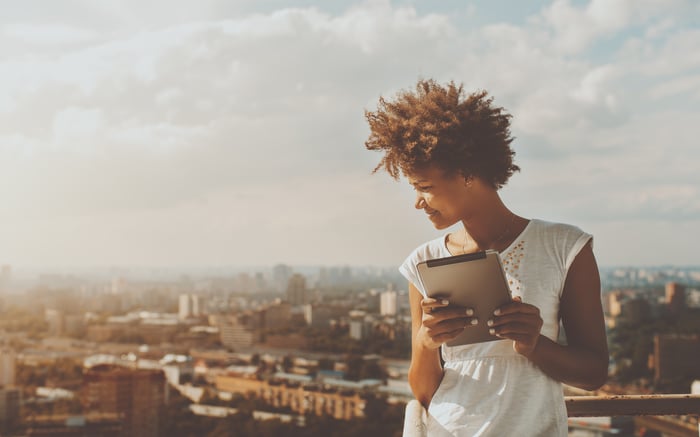 But that doesn't mean Amazon isn't legitimately growing into an advertising powerhouse. Companies spent 165% more for sponsored product ads on Amazon (which are displayed at the top of search results on the e-commerce site) in the second quarter of this year than they did a year ago, according to the marketing firm Merkle.

Amazon's advertising growth is likely just getting started. The company's platform will account for an estimated 7% of all U.S. digital ad sales by 2020.

Of course, this is all good news for Amazon. But why does it matter for the company and its investors? Because Amazon's advertising business could soon become even more lucrative than its Amazon Web Services (AWS) cloud computing segment.

Bigger than the cloud

One of Amazon's most profitable businesses over the past few years has been AWS. The cloud computing platform brought in $1.64 billion in operating income in the most recent quarter, and sales from the segment accounted for 11.5% of Amazon's top line. Additionally, Amazon holds the No. 1 position in cloud infrastructure market share, with about 33% of the market. That's important, because the cloud market will be worth $302.5 billion by 2021, up from $153.5 billion in 2017, according to Gartner.

But as important and lucrative as AWS is, Amazon's recent increase in ad sales and profits could become even more important to its business over the next few years.

Piper Jaffray analyst Michael Olson said in August that Amazon's advertising operating income would grow to $16 billion in 2021 and outpace the company's AWS operating income of $15 billion that year. "Investors should be focused on Amazon advertising now; this is a major driver to results and valuation today and continuing in the coming quarters & years," Olson said.

Olson's estimate doesn't seem so far off base when you consider that Amazon is expected to reach $22 billion in ad revenue by 2022. Amazon's potential to make its advertising business bigger than AWS comes in part from the fact that online shoppers are going directly to Amazon's site to search for products, instead of using Google. About 55% of all online shoppers now head straight to Amazon to search for products, up from 44% last year.

As Amazon's e-commerce platform increasingly becomes the initial go-to destination for online shoppers, advertisers will continue to increase their spending on the company's site. And if the above estimates pan out, then Amazon's advertising business could overtake AWS profits in just a few years.

Amazon investors (or potential ones) should take note of Amazon's rising significance in the advertising market. While it's natural to compare the company's advertising market share unfavorably to Facebook and Google's dominance, it's important not to get caught up in measuring the three with the same stick.

Amazon is building out a third, and already lucrative, pillar of its business that will be a nice addition to its e-commerce and cloud computing segments. The company doesn't have to beat Google and Facebook in advertising sales; it just has to continue taking a little bit of market share away from them. The 4% of the U.S. digital advertising market that Amazon has right now is already boosting its profit. A small increase in that percentage over the next few years would do even more good for Amazon's bottom line.

Investors should strongly consider adding Amazon's advertising business into their investing thesis for the company. Between Amazon's dominance in the e-commerce world, its lead in cloud computing, and now its lucrative and fast-growing advertising business, this company looks better than ever before.