It's hard to believe that just 10 years ago, many investors believed that the financial markets were in dire jeopardy of falling apart. In just one short year, the Dow Jones Industrial Average (DJINDICES:^DJI) went from setting record highs to plunging more than 50% to its lowest level in more than a decade. Yet as painful as the financial crisis was, it didn't take very long for the stock market to recover. By 2013, just four years after the end of the bear market, the Dow closed at a new record.

Now, investors have been worrying that the nearly 10-year-old bull market could be running out of gas. After having risen consistently to new heights time and time again over the past five years, the Dow had gone nearly eight months without a record close. Once again, though, the stock market proved its ability to bounce back, and the Dow reached an all-time high last Thursday and then added a further advance the following day.

It's easy to get spoiled during bull markets, and the current one has been particularly strong. Record closes have become so common that they no longer seem all that special, as you can see below: 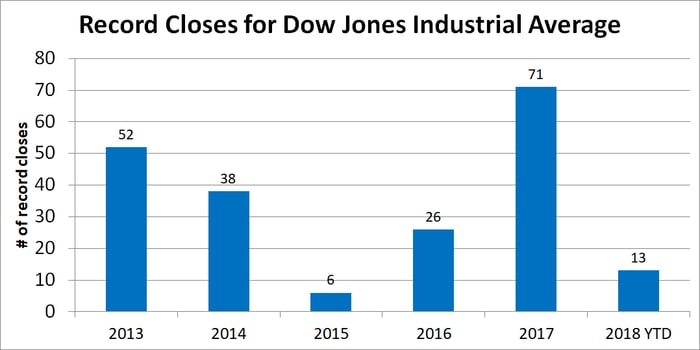 In particular, last year's tally of 71 daily record closes was itself a record for the Dow's 100-plus-year history. Investors saw a new high nearly three trading days out of 10. Those records tend to come in runs, when the Dow rises consistently on strong news either from corporate America or on the macroeconomic or geopolitical fronts.

Barring an unprecedented rally, 2018 won't be able to match 2017's total. But as long as stocks can keep climbing steadily, few investors will be likely to complain.