Please ensure Javascript is enabled for purposes of website accessibility
Log In Help Join The Motley Fool
Free Article Join Over 1 Million Premium Members And Get More In-Depth Stock Guidance and Research
By Daniel B. Kline - Updated Sep 24, 2018 at 4:09PM

It's a number that varies with age.

Not everyone defines being "well-off" the same way. A struggling recent graduate may be comfortable with a few bucks in his wallet and food in the fridge while a working single mom may not be comfortable without a six-month emergency fund in the bank.

"At different stages in life, various sums of money can go from being perceived as quite a lot of cash to hardly enough to get by on," according to Comet, which commissioned a study of how over 1,000 people define being well-off. "By that same token, financial gurus recommend increasing your target savings amount as you get older. The money you might need to cover an emergency in your 20s isn't nearly as much as you'll need for retirement in your 50s and 60s."

Being well-off is a moving target. The amount you need to feel financially comfortable can vary by person, but the survey showed that the amounts needed increase as people get older. 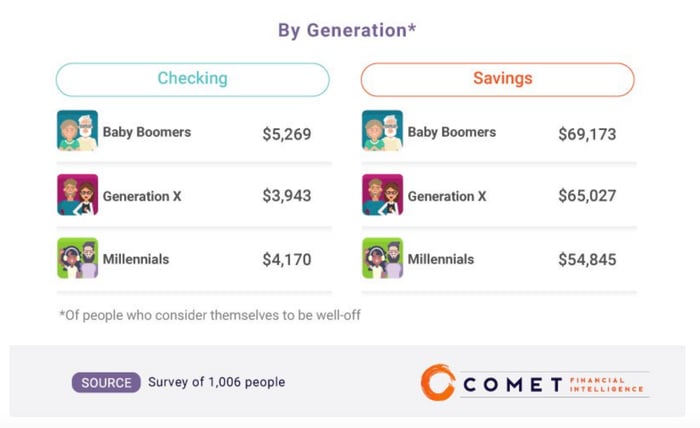 Surprisingly, the numbers aren't all that different by generation and you could argue that none of the averages on the chart above actually equal being well off (though the survey does not make it clear if "savings" includes all retirement assets). In fact, Millennials would be in the best shape because they still have time to adequately save for retirement (and having nearly $60,000 saved at a young age is actually pretty impressive.

All the generations have different views about what being well off means. Millennials see it as being debt free, being able to pay your bills on time, and being able to afford travel and experiences (like a concert). Generation X agree when it comes to paying bills and travel/experiences, but they also believe being well off means owning a home. Baby Boomers, the oldest of the three generations surveyed see being well off as having no debts, a solid investment portfolio, and having established a retirement fund.

"More than anything else, over 69% of people felt good about their monetary position when they could pay their bills on time," the survey found. "...Nearly as many felt well-off when they were debt-free, could afford experiences like traveling or going to concerts, or had established a retirement fund. In contrast, things such as starting their own business or enjoying the topic of money were less common indicators of feeling financially healthy." 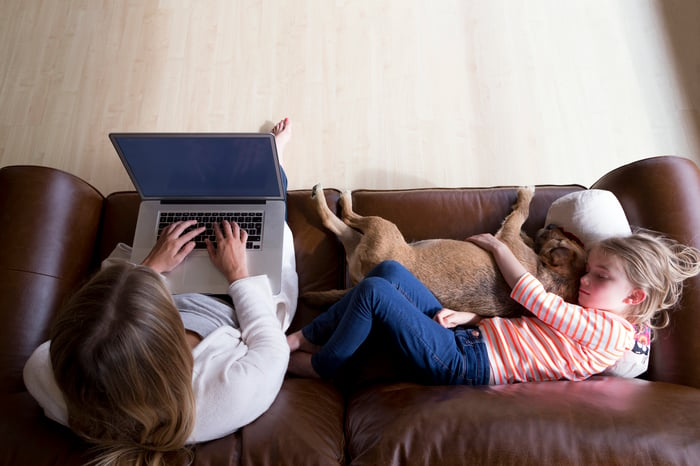 Being well off is about more than money. Image source: Getty Images.

Are you well off?

The reality is that you are well off when you can meet your current obligations, have money set aside for a rainy day as well as retirement, and have enough to do at least some of the things you want to do. Some people will feel well off when they can buy a home and others may feel that way when they can eat out if they feel like it.

Being well off isn't really a number. Yes, you need a base level of income/savings in order to pay for basic necessities. What constitutes food, shelter, and clothing can vary from peanut butter sandwiches in a modest apartment wearing off-brand clothes to lobster in an oceanfront mansion while dressing in only the latest fashions.

Well off is really a state of mind once you're neither hungry, naked, or without a place to live. It's important to strive to meet your financial goals. It's also important to keep things in perspective and appreciate how well you have it even if you don't quite have everything you want.