Shares of Hudson Ltd. (NYSE:HUD) are starting to win adherents following the 31-year-old organization's initial public offering in early February 2018. After a tepid start, the stock of the airport-focused travel retailer, with operations in the U.S. and Canada, is up 28% since its debut.

Nearly all the "HUD" ticker's appreciation has occurred after the company issued its second-quarter 2018 earnings report on Aug. 3. Earlier this year, I discussed Hudson's business model in detail with my colleague Vincent Shen. Let's follow up on the company's recent filing to understand why investors are endorsing its performance out of the proverbial airport gate. 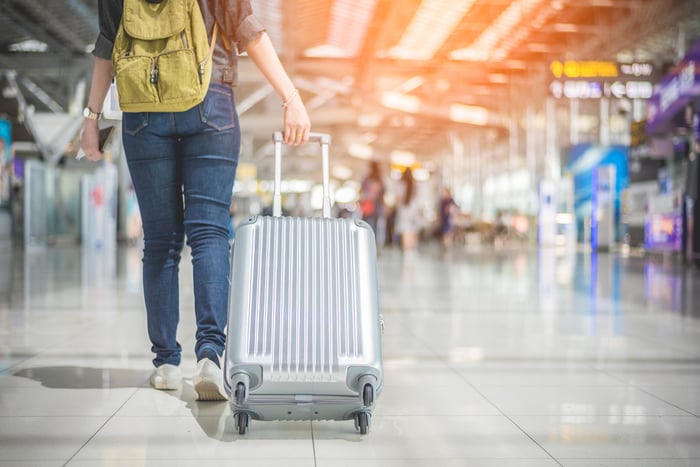 Organic revenue growth is coasting within a long-term trend

Hudson increased reported revenue by 7.4% against the second quarter of 2017, to $499.4 million. Through the first six months of 2018, the company has improved its top line by 8.3% year over year. The first-half performance was propelled by a healthy 5% increase in comparable sales, with the balance supplied primarily by new store openings.

Organic growth, which excludes the impact of acquisitions, improved 8.8% over the first two quarters of the comparable 2017 period. Current organic expansion is well-outpacing industry growth: North American airport-traveler volume has grown in recent years at a 3% compounded annual growth rate and is projected to continue increasing at this pace through 2025.

More pertinently, Hudson's roughly 9% organic growth so far in 2018 is in line with the 9.4% annual organic revenue growth that it's averaged over the last eight years -- a compelling trend for shareholders.

Hudson is exploiting opportunity in food and beverage services

Hudson derives about 95% of its revenue from airport business; the rest is divided between downtown shops and hotel and railway-station locations. Within the airport channel, food and beverage is the company's largest revenue category and provided 38% of the overall top line in the second quarter of 2018. The next-largest category was perfume and cosmetics, at 15% of revenue.

Food and beverage sales grew 14% year over year during the last three months and have been paced by management's decision to expand open-island coolers in travel-essentials stores. This enables "grab and go" purchases of refrigerated boxed foods in stores that are more geared to general retail merchandise.

During the company's August earnings conference call, CEO Joe DiDomizio observed that grab and go products notched 53% growth in the second quarter versus the prior year. DiDomizio also noted that stores with open-island coolers are experiencing three times the food and beverage sales of those that don't feature the units. Hudson began calendar year 2018 with island coolers in 10 stores and plans to increase this number to 45 by year-end.

The continual addition of retail square footage is central to Hudson Ltd.'s growth plan. In the second quarter, the company won notable space Requests for Proposals (RFPs) at LaGuardia International and Boston Logan airports. Both are existing Hudson markets.

Higher profitability, and one high expense to note

Hudson amplified its already healthy gross margin by 1.7 percentage points during the quarter, to 63.9%. The company also has controlled its operating expenses this year, thus obtaining leverage from its top-line growth. Beneficially, Hudson now pays a reduced franchise fee to publicly traded parent Dufry, AG, which has resulted in at least 2 percentage points of operational-expense reduction during the first half of the year. Due to the factors above, net income of $26.2 million through the first six months of 2018 far outpaced the prior-year period's $1.2 million in net income.

Higher earnings have translated into a better capacity to manage debt. The company's debt-to-EBITDA ratio has decreased from a moderate 3.5 times in 2017 to roughly 1.5 times at the midpoint of 2018. Nonetheless, the present debt load isn't cheap. Hudson holds $601 million in long-term borrowings on its books, $520 million of which is owed to parent Dufry at an average interest rate of just over 5%. Interest expense of $15.6 million in the first half of 2018 was the biggest factor that trimmed operating profit of $44.6 million down to net income of $26.2 million.

This expense quibble aside, Hudson Ltd.'s financials provide support for management's thesis that, as U.S. airports modernize, renovate, and expand to keep up with passenger growth, the company will gain a long runway for retail expansion. Hudson's shares currently trade at roughly 25 times forward earnings, a reasonable valuation for a small-cap stock ($2.1 billion market capitalization), with much potential for earnings acceleration.