Please ensure Javascript is enabled for purposes of website accessibility
Free Article Join Over 1 Million Premium Members And Get More In-Depth Stock Guidance and Research
By Daniel Sparks - Sep 27, 2018 at 11:11AM

During Nike's first-quarter earnings call, management provided a look at the impact of the company's recent controversial marketing campaign, the consumer environment for Nike products in China, and some of the drivers for the company's return to growth in North America. 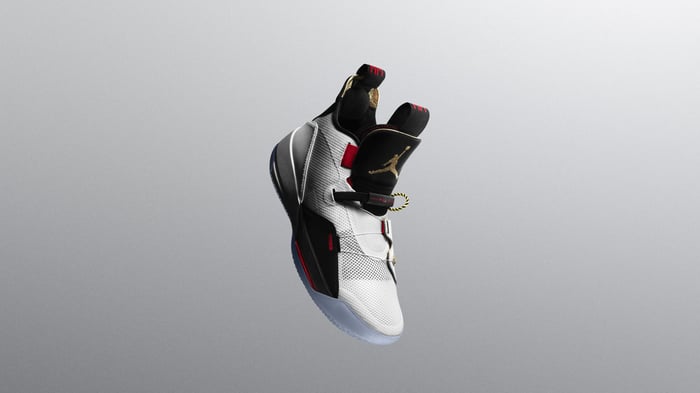 Management is "very proud" of its new marketing campaign

Nike's recently launched 30th anniversary "Just Do It" campaign sparked a polarizing response on social media, prompting both a significant backlash and avid defense of the company's decision to feature quarterback Colin Kaepernick, known for sparking the trend of NFL players kneeling in protest.

While debate about the controversial Nike campaign continues, there is one thing investors can be certain about: The campaign is driving record engagement. Further, Nike CEO Mark Parker said the company feels "very good" and is "very proud" of the campaign.

One market Nike is particularly optimistic about is China. On the heels of 17 consecutive quarters of double-digit sales growth in the market, Parker said Nike boasts "really strong underlying fundamentals" in China.

Our fundamentals in China are actually quite strong and sound. We're not seeing any pushback from consumers. On the contrary, our relationship and connection to consumers is as strong as it could possibly be. We feel confident in our ability to continue to grow.

"In North America, we have returned to strong, sustainable growth," Nike CFO Andy Campion explained in the company's first-quarter earnings call. This growth was "led by accelerating growth across both footwear and apparel, driven by new innovation platforms, as well as strong owned and partner digital growth," Campion said.

Nike was particularly pleased with its digital channel in North America, Campion said. "We had extremely strong double-digit growth in digital and acceleration in that regard."