It's no secret that Amazon (NASDAQ:AMZN) has been betting big on its Alexa-powered Echo smart speakers. The opportunity to engage directly with customers, keep the company top of mind, and provide shoppers with additional ways to make purchases has resulted in a powerful and quickly growing business for the e-commerce giant.

Now, the company is making an even larger play for growing its footprint where customers live. Amazon released a dizzying array of new products that will expand Alexa's presence to nearly every room in your home -- and beyond.

At an event held last week, Amazon unveiled a plethora of new devices designed to put Alexa front and center in almost every room in the house -- including the garage. 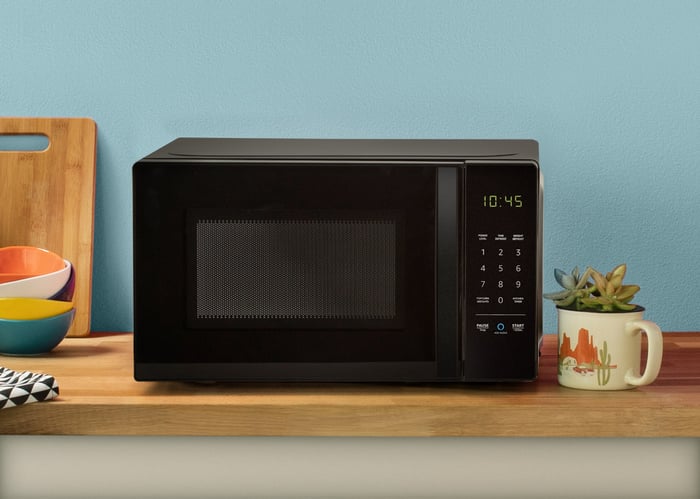 This AmazonBasics Microwave takes commands from a nearby Echo device. Image source: Amazon.

Amazon added a host of devices aimed squarely at music enthusiasts. The Echo Sub is a wireless sub-woofer that is designed to provide deeper bass and work in conjunction with other Echo speakers to create surround sound and enhance the listening experience -- all for about $130. The company also debuted two new companion products, the Echo Link and the Echo Link Amp; the amps run for about $200 and $300, respectively. While these devices don't come equipped with Alexa, they are designed to "link" to other Echo devices and allow existing non-Alexa enabled stereo systems to integrate with Alexa.

The AmazonBasics microwave, which retails for $60, links to a nearby Echo device that will accept voice commands on its behalf and can calculate common defrosting or cooking times. The Alexa wall clock, at $30, provides standard time-keeping functionality, and while it lacks its own microphone, it can be accessed via another Echo device to program and manage timers.

Alexa is also finding its way into your garage by way of the Echo Auto, a device that will use Bluetooth or an auxiliary jack to bring Alexa's voice commands to your dashboard. The device will be able to give directions or initiate custom smart home routines when you arrive home, like unlocking the door and turning on the lights simultaneously. The Auto will eventually retail for $50, but it's currently available by invitation only.

New home security functionality -- the Alexa Guard -- can turn lights on and off to deter intruders, and it will send alerts to your smartphone if it detects smoke, carbon dioxide, or breaking glass.

In addition to its new devices and features, Amazon has also redesigned a number of its existing Echo products. The Echo Show now has a bigger screen, while the Echo Dot -- Amazon's most popular smart speaker -- boasts a new fabric cover. All Alexa-powered devices are getting a software makeover, and Amazon will be rolling out updates to the digital darling in the coming weeks and months.

This novelty is serious business

The Echo and its smaller form factor, the Dot, have consistently been among the most popular products on Amazon's website, though the company has yet to release any official sales numbers for the devices. Consumer Intelligence Research Partners (CIRP) crunched the numbers and estimates that the installed base of smart speakers in the U.S. now exceeds 50 million units, with Amazon controlling 70% of the market. CIRP calculated that Amazon has sold more than 35 million Echo devices since the product first debuted in 2015.

It's even more important to note that Echo users spend considerably more on Amazon's e-commerce site than any other group of customers -- even the highly coveted Prime members. CIRP has previously estimated that Echo owners spend a whopping 66% more, on average, than the typical Amazon customer -- at about $1,700 annually.

With a growing assortment of Alexa-powered devices spanning nearly every room in the house, Amazon now has even more ways to connect with customers -- and their wallets.