Please ensure Javascript is enabled for purposes of website accessibility
Log In Help Join The Motley Fool
Free Article Join Over 1 Million Premium Members And Get More In-Depth Stock Guidance and Research
By Tyler Crowe - Sep 27, 2018 at 6:34AM

Slowing its distribution growth rate may not have been the most popular move, but management shows why it makes a lot of sense today.

For close to two decades, Enterprise Products Partners (EPD 1.04%) has been a wealth-compounding machine for its investors, thanks to a reasonable yield and a payout that has grown consistently since it went public. Over the past few years, though, that growth has stalled out a bit, as investors have soured on oil and gas investments in general and on management's decision to slow the company's payout growth.

The announcement that investors' distribution checks weren't going to grow as quickly as they have in the past may sound like the company is struggling with finances. On the contrary, the decision appears to be saving Enterprise Products Partners hundreds of millions of dollars annually, and should make it a better investment down the road. This statement from management explains it all. 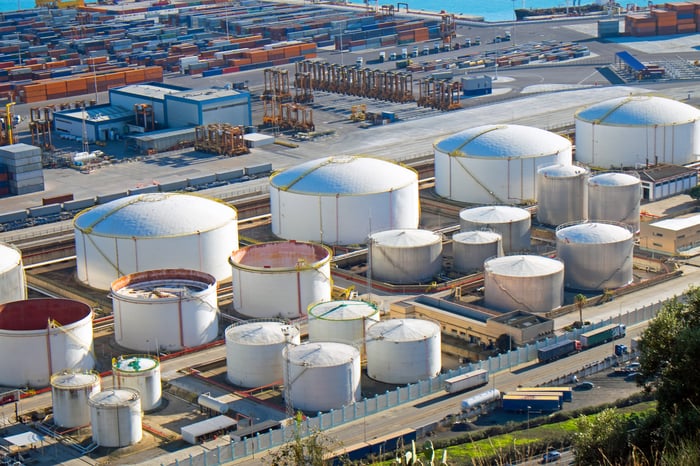 During the typical rundown of Enterprise's finances on its quarterly conference call, then-CFO Bryan Bulawa concluded with a statement about management's decision to slow its payout growth a little less than a year ago. What he chose to point out was how much this decision was saving the company in future costs:

Year to date we have retained $948 million in excess distributable cash flow. As our chiefest source of equity funding, retained distributable cash flow effectively enhanced DCF per unit by avoiding the issuance of approximately 35 million to 36 million incremental units. And as we continue to announce incremental growth projects, we remain confident in our ability to self-fund the equity portion of our growth capital through 2019.

With respect to our approach on distribution growth, I'd like to reiterate comments we've made on previous calls. We intend to continue recommending to our board to grow our quarterly distributions in 2018, at a quarter of a penny per unit per quarter, and will reassess in 2019 our investment opportunities and alternatives for returning capital to investors.

When you start to consider the costs of that equity over time, though, you can see why it makes much more sense for the company to use cash instead of equity for future growth. Based on this statement, management would require 70 million to 72 million in issued shares to pay for its growth plans in 2018. Once management issues those units, though, management has to pay the distribution to them in perpetuity. Based on its current distribution, that's $120 million to $125 million a year in additional payments, which will grow over time as management grows its payout.

This goes to show how expensive it can get for companies in the midstream business if they don't manage their capital effectively. Becoming overly reliant on outside sources such as debt or equity can run up a large quarterly bill that needs to be paid out.

Even though Enterprise's decision to slow distribution payment growth makes the stock slightly less attractive today, it will pay off in the long run. As assets under construction get built and start to contribute cash, that cash will be divided up among a smaller number of units than if it had elected to use equity as a funding source. 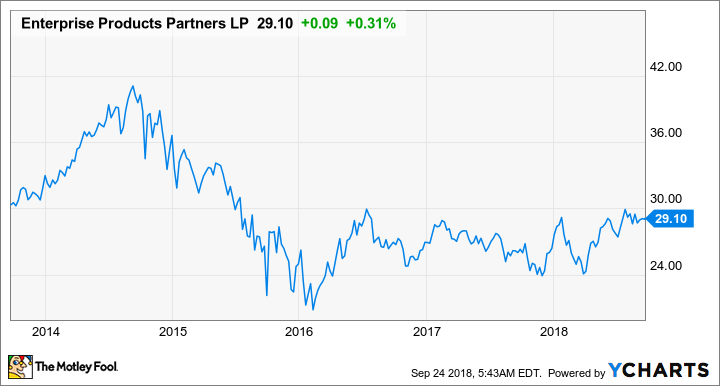 Management is trying to limit the number of units it issues as much as possible; one of the more obvious reasons is that it's expensive for the company to issue them today. Its shares are more than 29% off their highs back in 2014, and its current distribution yield of 5.8% is on the high side of its 10-year historical average. If the market were incredibly bullish on Enterprise's stock and its yield were much lower, then perhaps management wouldn't be so apprehensive about issuing stock. After all, a high stock price means issuing fewer units to raise the same amount of cash. That isn't the case right now, though, and the most cost-effective way to grow the business right now is to use retained cash.

The company's ability to identify the most effective way to fund its growth and its flexibility to shift to more retained cash without having to do something drastic, like cut its payout, are perhaps the most bullish signs about Enterprise's stock. That's especially important as interest rates start to rise and debt funding becomes more expensive.

Slower payout growth is rarely something that investors get excited about. In this case, though, Enterprise's management is proving that its decision was the right one at the right time -- one that will pay off for its unitholders in the long run.