On Monday, General Electric (GE 3.33%) dismissed CEO John Flannery, in conjunction with issuing yet another profit warning. While GE stock fell by more than half during Flannery's 14-month tenure, the move was shocking nonetheless. Flannery's two immediate predecessors as CEO -- Jeff Immelt and Jack Welch -- served for a combined 36 years.

Investors cheered the company's decision to replace Flannery with former Danaher CEO Lawrence Culp. GE stock soared about 9% as of 1 p.m. EDT on Monday, despite the profit warning. But there's not going to be a quick fix for General Electric's current woes. It will likely take years to get the company back to full health. 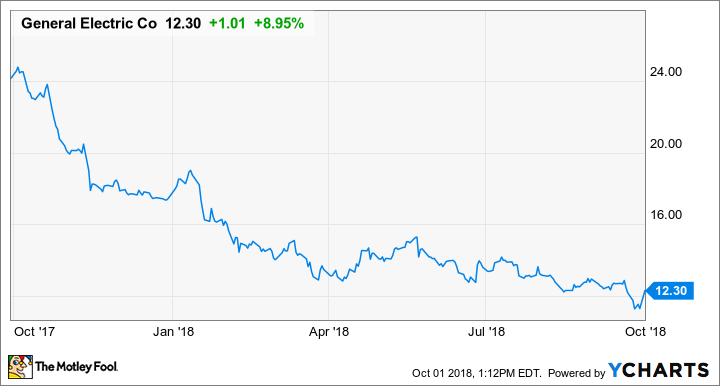 Flannery was dealt a weak hand when he started as CEO last August. General Electric was just starting to come to grips with a steep drop in demand in its power segment and rising liabilities in the GE Capital unit. Yet investors clearly didn't realize the scale of GE's problems.

As a result, every new revelation about how long it might take for the power segment to bottom out and how big GE Capital's liabilities might be drove another sharp decline in GE stock. This created a sense of doom around the company that may have started to unnerve customers.

On the other hand, GE's aviation and healthcare franchises -- which account for the vast majority of the conglomerate's value -- posted strong growth during Flannery's tenure as CEO.

Flannery also began a process of radically restructuring GE to simplify the company. First, General Electric agreed to sell portions of its power and healthcare segments, as well as the entire GE Transportation division. More recently, the company decided to spin off its healthcare segment as a separate publicly traded company and to exit the oil and gas business by selling or spinning off its 62.5% stake in Baker Hughes, a GE Company.

These moves -- along with the planned sale of the rest of its lighting business -- will leave GE with three core segments: aviation, power, and renewables. All three have significant synergies with one another. They will be supported by a much smaller GE Capital operation and a very lean, hands-off global headquarters.

Why the board decided to make a change

Last month, GE disclosed a flaw in its new HA-class gas turbines that was causing an oxidation issue. This led to another round of worry about the power segment -- and another plunge in GE's stock price -- along with some chatter about whether leadership changes might be on the way. Yet this was not a major factor in the board's decision to remove Flannery. Instead, the board was frustrated by GE's poor execution over the past year and the deliberate pace of change under Flannery, according to CNBC.

The execution problems were highlighted in GE's announcement, as the company abandoned its 2018 earnings and cash flow guidance. General Electric's initial guidance for the year called for adjusted earnings per share between $1 and $1.07, and industrial free cash flow between $6 billion and $7 billion. By July, the company had warned investors that both metrics were likely to come in at the bottom of those forecast ranges. However, GE now expects EPS and industrial free cash flow to come in below the previous guidance ranges.

The presence of Larry Culp on the GE board -- which he joined back in April -- also may have contributed to the management change. Other board members may have seen that Culp had valid ideas for cutting costs more aggressively. Additionally, his work on the board over the past few months will help him get up to speed faster than a complete outsider.

Was this the right move?

Personally, I think that John Flannery got a raw deal. He was handed a massive conglomerate facing major problems that had built up over decades and couldn't realistically be solved within a year or two. Objectively, his biggest mistake was holding a big investor meeting last November, before the company had fully reckoned with the problems at GE Power and GE Capital, and before Flannery had definitively settled on a go-forward strategy.

That said, the negative publicity around General Electric over the past year has been toxic -- not just for GE stock, but for the business itself. The sad fact is that Flannery may be more valuable to GE as a scapegoat than as a CEO.

Culp is just as qualified for the CEO job as Flannery. Unlike Flannery, he will get the benefit of low expectations. Employees may also be more open to rapid change after the recent period of turmoil. Yet there's a good chance that he will be implementing a plan very close to the strategy drawn up by Flannery.

Given the substantial hidden value in GE's aviation and healthcare franchises, Culp should be able to steady the company and ultimately drive a rebound for GE stock.