Please ensure Javascript is enabled for purposes of website accessibility
Log In Help Join The Motley Fool
Free Article Join Over 1 Million Premium Members And Get More In-Depth Stock Guidance and Research
By Matthew DiLallo - Oct 3, 2018 at 11:13AM

Upheaval in the aluminum market is having a big impact on stock prices.

Shares of Century Aluminum Co (CENX 7.03%) are plunging today, down 14% as of 11:03 a.m. EDT, after Norsk Hydro (NHYDY 5.73%) shut down an alumina refinery in Brazil. That news sent the price of aluminum to a three-month high, which boosted Alcoa (AA) stock.

Norsk Hydro said that it would halt production at its Alunorte alumina refinery in Brazil, which fueled concerns that there would be a shortage of this key raw material for making aluminum. The refinery had already been running at half its capacity due to an environmental dispute. However, its full shutdown is sending shockwaves throughout the aluminum sector since it was the largest alumina refinery in the world, contributing 10% of global supplies outside of China. 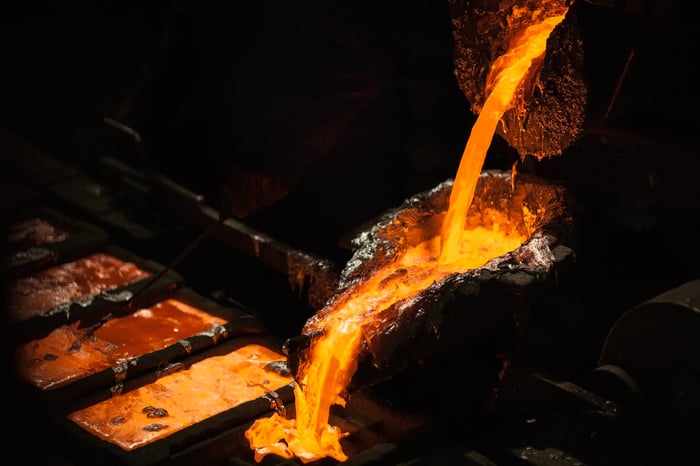 While the shutdown of Norsk Hydro's facility was good news for Alcoa since it also produces alumina, it was another blow to Century Aluminum, which isn't vertically integrated. As a result, its margins could be under even more pressure due to the disruptions in alumina supply. Deutsche Bank voiced its concerns about the company's margins even before today's news, downgrading the stock yesterday from buy to hold while lowering its price target from $20 to $15 per share.

With supplies of a key raw material growing even tighter, it should send its price higher, which would put more pressure on Century Aluminum's margins. It's unclear when this situation will ease up, and that could cause shares to continue to underperform rival Alcoa in the coming months.