Shares of Upwork Inc. (NASDAQ:UPWK) were taking a bow today as the company appeared to be a hit in its market debut. Shares of the freelancing platform closed up 41.2% from its IPO price of $15, a sign investors think that Upwork has a bright future. 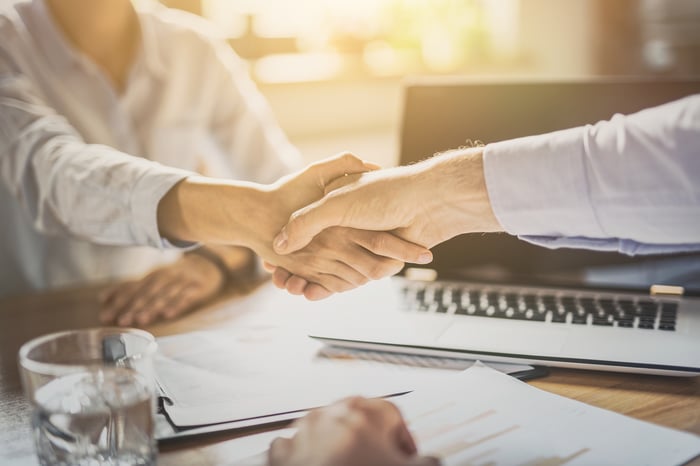 Upwork is the leading online platform for connecting businesses with freelancers and other talent, and the company sees itself as "changing the way work gets done."  Over the last four quarters, it has registered $1.56 billion in gross services volume (GSV) and revenue of $228.9 million. Revenue increased 23% from 2016 to 2017, and 28% in the first half of this year, and it posted a net loss of $4.1 million for 2017 and $7.2 million for the first half of 2018. The company said it has made significant investments in sales and marketing, research and development, operations, and personnel, which have weighed on the bottom line.

With 104 million shares outstanding, the company is now worth more than $2 billion after today's gains, but that gives the stock a steep multiple at about 10 times trailing sales, meaning shares are pricey. Management says that the total global GSV opportunity for its platform was $560 billion last year, and McKinsey Global Institute said that by 2025, online talent platforms could contribute $2.7 trillion, or 2%, to global gross domestic product.

While such numbers might make investors salivate, Upwork isn't growing fast enough to convince me that it will necessarily take advantage of that opportunity, especially as hiring is a highly fragmented business. Despite today's pop, I'm content to sit on the sidelines for now.