Analog chips and microcontrollers are found in just about every single electronic device. Analog chips process inputs from the natural world such as sound, light, or pressure, turn them into digital signals (or vice versa). Microcontrollers are exactly what they sound like -- tiny computers that perform a specific function as part of an integrated circuit or system (often with little power consumption). Both types of devices have favorable prospects, given increasing electronics present in cars and factories.

Two leading microcontroller and analog chip companies are Texas Instruments (NASDAQ:TXN) and Microchip Technologies (NASDAQ:MCHP). Each is large and well diversified across end markets, and both should benefit as electronic content grows. In addition, both companies have proven to be very good stewards of shareholder capital.

Nevertheless, both companies have also encountered turbulence recently, with company-specific problems compounding concerns over a slowdown fueled by the U.S.–China trade skirmish.

Problems near the top

This past summer, both Texas Instruments and Microchip encountered adversities.

In July, Texas Instruments' new CEO, Brian Crutcher, resigned due, according to the company, to "violations of the company's code of conduct. The violations are related to personal behavior that is not consistent with our ethics and core values, but not related to company strategy, operations or financial reporting." Crutcher was replaced by Chairman Rich Templeton, who had been the company's CEO from 2004 until this past June.

Microchip has run into a more serious problem (it appears) with its recent acquisition of chip company Microsemi. After acquiring Microsemi for $10.15 billion in May, Microchip found out that prior management had been sending larger orders to distributors in exchange for discounts in order to make its recent quarters look better.

Despite these problems, I think both companies can turn things around. Texas Instruments is fortunate to have Templeton return to the helm and Microsemi's management believes the excess channel inventory should be cleared over the next few quarters and reiterated its $300 million cost-saving synergy target even after the revelations.

I think both companies' problems are fixable. So which is the better buy? Let's look at four factors, with accompanying charts. 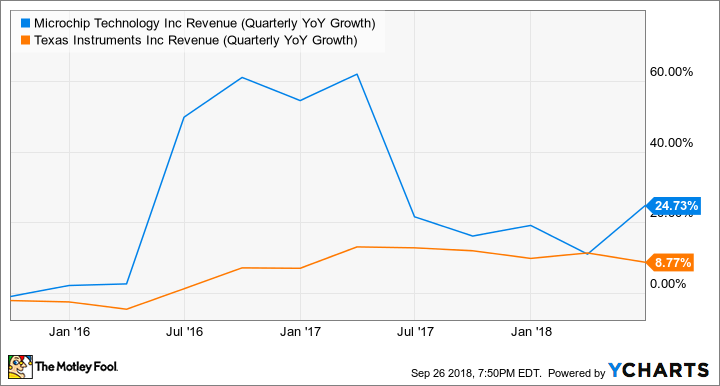 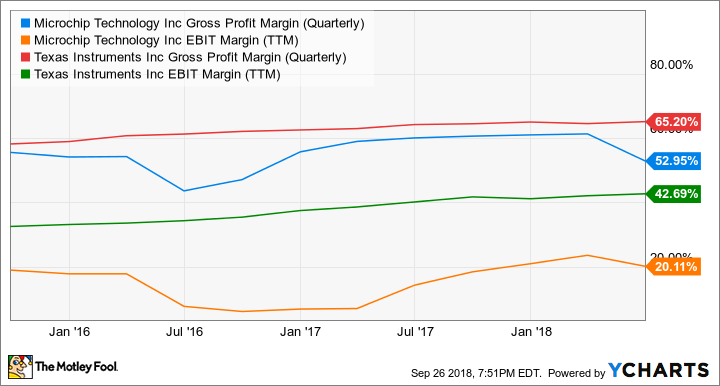 When comparing companies, it's important to look not just at the income statement but also at the balance sheet. As I mentioned, Microchip recently made the huge Microsemi purchase and paid for it almost entirely with debt. That's ballooned  Microchip's debt to more than $10 billion, around five times this year's EBITDA (earnings before interest, taxes, depreciation, and amortization).

Texas Instruments, by contrast, has a small net cash position, meaning it has roughly as much cash as debt on its balance sheet. 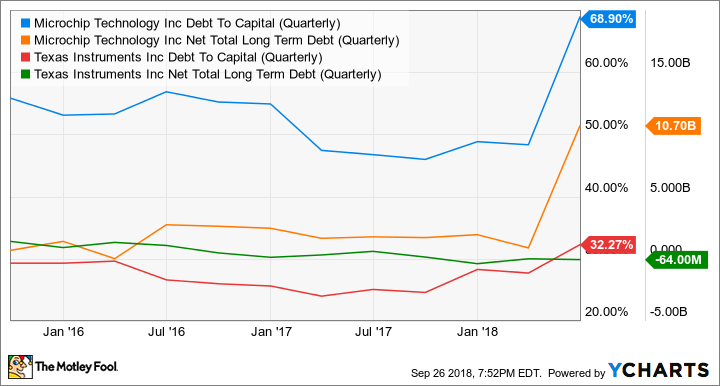 Of course, the success of any investment is determined not only by the quality and growth of earnings but also by the amount paid for the stock. Looking at each stock's valuation, it appears the market is much more nervous about Microchip's situation than about that of Texas Instruments. Microchip's forward P/E ratio, which looks at the stock's price and the company's expected earnings, is well below that of Texas Instruments and also its own historical valuation. 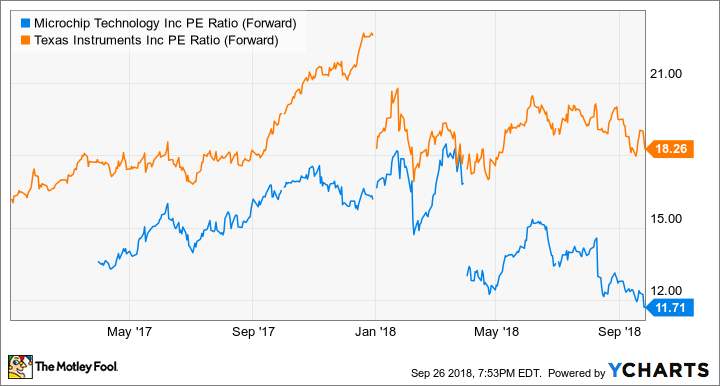 Since they're tied at two wins each, the choice between Microchip and Texas Instruments likely depends on your risk tolerance. Microchip's lower valuation, combined with higher growth prospects, gives it much more potential upside. That being said, Microchip investors are also taking on much more risk.

For more risk-averse investors, Texas Instruments is the better choice. Its steadier growth and fatter margins enable Texas Instruments to have a higher dividend yield (2.86%) than Microchip (1.85%). By the way, Texas Instruments just raised that dividend a whopping 24% ... for the second straight year. That's in contrast to Microchip, which likely won't be raising its dividend anytime soon as it pays down its acquisition debt.

So investors who like steady and rising payouts might opt for Texas Instruments, while those with a bit more risk appetite in pursuit of large capital gains could opt to bet on Microchip's turnaround instead. Absent a global recession, I like both companies going forward.