Opportunities to invest in companies focused on driverless-vehicle technologies are rare. Here's what you need to know about one that might be unfamiliar.

The automotive industry is known for being cyclical, highly competitive, and capital-intensive -- basically, everything investors prefer to avoid. But the industry is on the cusp of becoming more technology-oriented, potentially more profitable, and far more exciting as a combination of Silicon Valley tech icons mix with Detroit's legacy automakers to develop the driverless cars that could change transportation as we know it.

Intel predicts the driverless economy will be a $7 trillion annual revenue stream. But driverless development is at such an early stage, investors don't have many options to invest in this lucrative future.

Still, companies are starting to pop up, and Veoneer (VNE), which only went public in July after being spun off from Autoliv, is likely a driverless stock you've never heard of and one worth considering. Here's what you need to know.

Let's cover some basics. The company designs, develops, and manufactures safety electronics for the automotive industry across the globe. These include active-safety products like radar, cameras for driver assist systems, night vision, positioning systems, restraint control systems, and brake technologies. It's one of the active-safety industry leaders, supplying several auto manufacturers, and it has strategic partnerships with companies including NVIDIA, Velodyne, and Volvo cars.

The future looks enticing, as the average active-safety content in each vehicle is expected to jump to $225 by 2025, roughly five times the value today. Increasing safety content is expected to drive strong growth in Veoneer's core active-safety electronics market: It's estimated that it will grow from $20 billion in 2017 to more than $49 billion by 2025. Zeroing in on Veoneer's own goals, it's targeting $3 billion in sales by 2020, up from $2.3 billion during 2017, at an adjusted operating margin between 0% and 5%. The company plans to double that to surpass $6 billion in sales by 2025.

Why Veoneer can succeed

Two things investors should know when considering owning Veoneer's stock are its market positioning and track record. The company owns a leading 25% market share in restraint control systems (RCS) -- technology for passive-safety systems like airbags. Veoneer also has a strong 16% market share in a fragmented active-safety market, and a growing position in its recently founded brake systems unit at 4%. Essentially, the company's RCS and active-safety systems segments are well positioned to take advantage of strong growth in driverless vehicles over the coming decades. 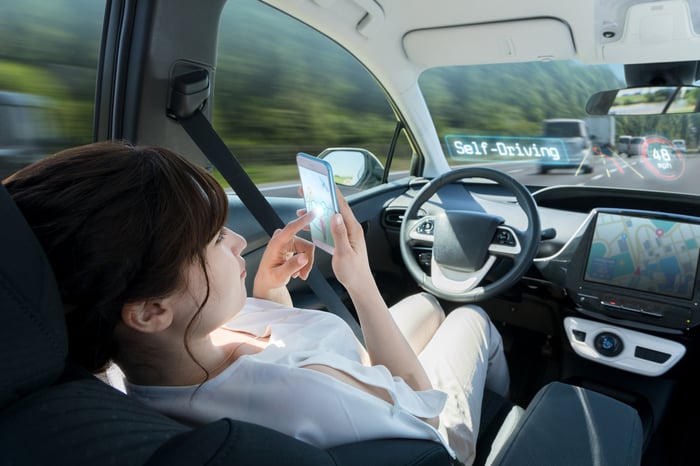 Just as important as its potential growth is its proven track record for innovation. One example from 2012: Veoneer (Autoliv at the time) introduced the world's first automated emergency braking for both vision and radar. Another example from 2016: It introduced third-generation night vision solutions, the first such system that could detect traffic danger in darkness or fog.

Driverless vehicles are the future, and investors will want to own shares of companies that have strong market share and a proven ability to develop innovative products; Veoneer checks those two boxes.

Veoneer's focus on driverless vehicle technology will help grow the top line at an accelerated pace once the vehicles are produced at a higher rate in the years ahead. Further, its focus on safety technology will help shield its business from some of the cyclical nature of the auto industry, especially as safety content is expected to surge per vehicle, even if total vehicle sales slow.

Driverless vehicles are wildly complex, though, so if the development of necessary technology is slower than anticipated, it could stall the company's growth. Further, the competition to supply driverless vehicle technology is bound to heat up, and that could pressure Veoneer's pricing power.

Lastly, while Veoneer is well positioned in markets likely to thrive in the coming decades, and it has proven capable for innovation, the largest drawback right now could be hype that's fueled a 30% rise since it went public in July. In fact, Morningstar.com pegs it as 129% overvalued currently, and the company has yet to turn a profit.

Veoneer is a driverless stock you've likely never heard of, and it has the potential to significantly reward long-term investors if it can capitalize on driverless vehicle growth. But investors must consider the risks as well as the current premium price for Veoneer shares.

Gloomy Guidance Has Investors Pumping the Brakes on Veoneer
363%