Earlier this year, Primera Air became the latest budget carrier to begin offering no-frills flights to Europe with eye-opening starting fares. It joined competitors like Norwegian and WOW Air in trying to carve out a market niche by dramatically undercutting the economy fares of airline giants like Delta Air Lines (NYSE:DAL) and United Continental (NASDAQ:UAL).

Unfortunately, Primera suffered numerous setbacks during its first few months of serving the transatlantic market. This culminated in a cash crunch that management could not solve, causing the airline to shut down for good last week.

Last summer, Primera Air announced that it would begin flying across the Atlantic with fares starting at just $99 one-way. The carrier planned to use Airbus' (OTC:EADSY) state-of-the-art A321neo -- and eventually a longer-range version of the same jet.

The A321neo doesn't have nearly as much range as the wide-bodies that most airlines use for international flights, but it is capable of flying between the U.S. Northeast and parts of Western Europe. Accordingly, Primera planned to fly from Newark Airport (near New York City) and Boston to Paris and two points in the U.K.: London and Birmingham. 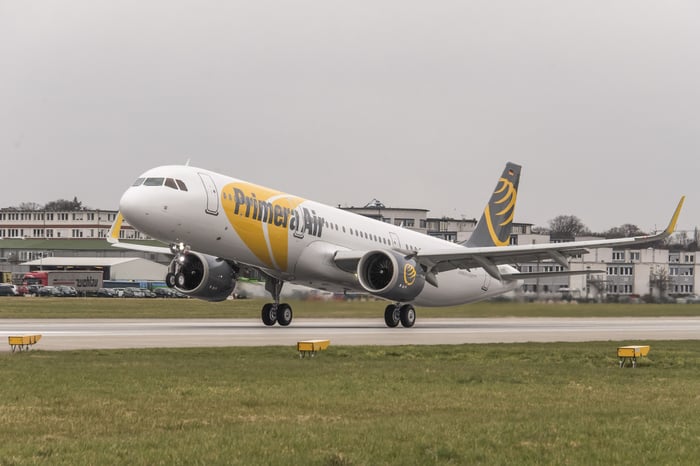 Like other no-frills airlines, Primera Air paired tantalizingly low base fares with high fees for options like selecting a seat in advance, checking a bag, or buying a meal on board. In theory, these extra charges -- combined with the low operating costs of the Airbus A321neo -- could have enabled Primera to turn a profit despite offering seemingly ridiculous fares.

However, Primera ran into problems even before its first transatlantic flights took off in April. The airline's initial A321neo deliveries were delayed due to production shortfalls at engine supplier CFM. As a result, the carrier had to lease Boeing 757s on short notice -- and at a high cost -- to cover its published schedule.

This forced reliance on 757s was disastrous for Primera Air. First, 757s burn far more fuel than A321neos. The increase in fuel consumption was particularly unfortunate given that jet fuel prices surged by about 50% between July 2017 (when Primera announced its transatlantic plans) and April 2018 (when it actually began service).

Second, the aging 757s weren't terribly reliable, leading to a slew of delays and last-minute flight cancellations. Delta Air Lines and United Continental both operate large 757 fleets reliably, but they have highly skilled maintenance organizations and plenty of spare planes. Primera Air didn't have either of those advantages.

Primera also made some dubious route network decisions. It dropped the planned Birmingham-Boston route before it even started. It canceled the Birmingham-Newark route soon thereafter. In August, it announced that its Boston-London and Boston-Paris routes would be suspended during the winter season, starting in late October.

In short, it seems that demand didn't come close to meeting expectations. Primera planned to shift its capacity to a handful of new U.S.-Europe routes, including service from New York and Boston to Frankfurt, Berlin, and Madrid; flights from Boston, Newark, and Washington to Brussels; and a Washington-London route. However, there's no reason to believe that these flights would have been any more successful for the carrier.

What does it mean going forward?

All else equal, the shutdown of Primera Air will be good for the U.S. legacy carriers, particularly Delta and United, which had the most overlap with its existing and planned routes. Based on the strong unit revenue growth these carriers have achieved in the transatlantic market, it's clear that Primera wasn't a major pest, but having less competition is almost always helpful.

For Airbus, Primera's collapse is an unfortunate consequence of the A321neo engine delays. (Though to be fair, the company may have failed even if its aircraft had been delivered on time.) Yet Primera was not a very large customer -- it had planned to have eight A321neos in its fleet by the end of 2018, whereas Airbus has a backlog of more than 6,000 A320-family aircraft.

Travelers who got great deals on Primera flights this summer may miss the carrier, but customers who were impacted by its operational problems -- not to mention those who were stranded this week when the airline folded -- will just say good riddance. A decade from now, Primera Air's short-lived transatlantic experiment will be long forgotten.