Graphics-specialist NVIDIA (NASDAQ:NVDA) has publicly committed to giving back $1.25 billion to shareholders during the course of its current fiscal year. The company intends to do that "through ongoing quarterly cash dividends and share repurchases."

I'd like to go over how NVIDIA has executed against those capital return plans over the course of the year and put those plans in the context of NVIDIA's business performance. 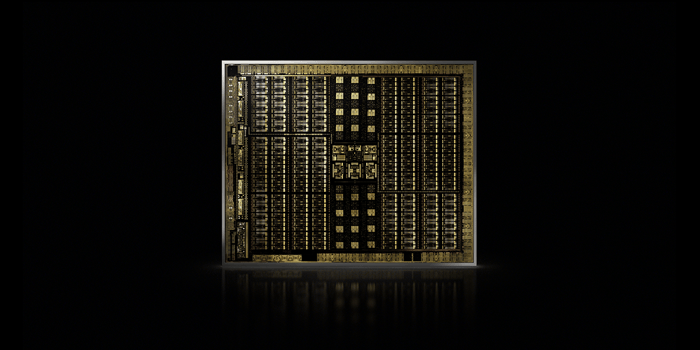 NVIDIA's current quarterly dividend sits at $0.15 per share -- an amount that it's declared for four straight quarters. On an annualized basis, that works out to $0.60 per share, for a dividend yield of just under 0.21%.

In its second-quarter earnings release, NVIDIA said that it's executed $837 million of its planned $1.25 billion capital-return program for fiscal year 2019 "through a combination of $655 million in share repurchases and $182 million in quarterly cash dividends." This means that between the company's share buyback and its dividend, it's only on the hook to return another $413 million during the remainder of the fiscal year.

That dividend is set to grow

NVIDIA has paid the same $0.15 per-share dividend for the last four quarters now. Although it doesn't look like NVIDIA's interested in becoming a high-yielding stock, the company's dividend history over the last several years suggests that it'll increase its dividend the next time it declares one. 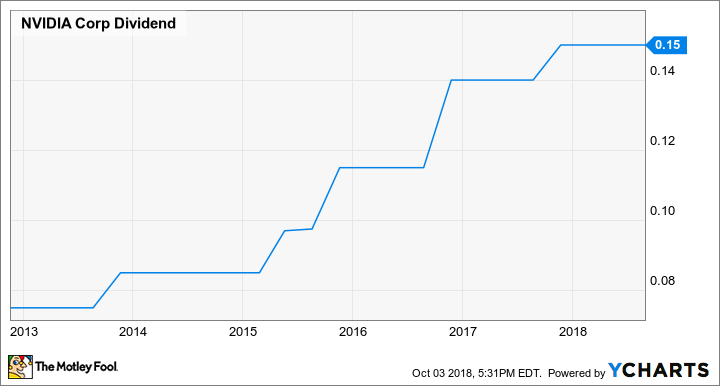 It's also worth pointing out that NVIDIA's free cash flow -- and by extension, its free cash flow per share -- has grown substantially over the years, particularly as its gaming and data center businesses have taken off: 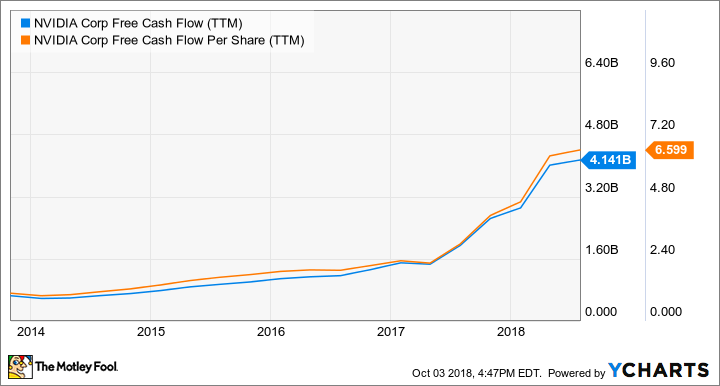 This suggests that there's a lot of room for NVIDIA to grow its dividend, as the company's current dividend represents only about 9.1% of its trailing-12-month free cash flow.

I'm not expecting NVIDIA to announce that it wants to allocate a large portion of its free cash flow to the dividend anytime soon. However, it seems reasonable to expect that next time the graphics giant announces a quarterly dividend increase, it'll be larger than the $0.01 per-share bump that it delivered the last time it did so.

Sometimes, companies will use their share repurchase programs to, in effect, buy back enough stock to keep the natural dilution that happens over time (share-based compensation is quite common in Silicon Valley). Others are more aggressive in their share-repurchase efforts as they aim to reduce (sometimes significantly) their diluted share counts in a bid to boost earnings per share. 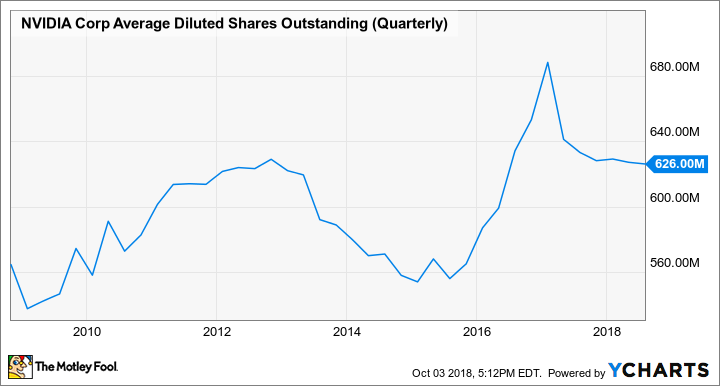 Over the last decade, NVIDIA's share count has both risen and fallen, but when you net it all out, the graphics giant's share count is higher than it was over the last 10 years. The reality is that NVIDIA's current market capitalization is currently north of $174 billion, and the company said in its most recent quarterly filing that, "[as] of July 29, 2018, we were authorized, subject to certain specifications, to repurchase additional shares of our common stock up to $1.16 billion through 2020." That repurchase authorization is good for less than 1% of the company's market capitalization.

For now, at least, it looks like NVIDIA's aim with respect to its share-repurchase program is to keep dilution in check, not to meaningfully reduce its share count.