Few companies can match the returns put up by HealthEquity (NASDAQ:HQY) in recent years. Shares of the innovative provider of health savings accounts (HSAs) are up 450% since its 2014 IPO. That return crushes the S&P 500.

And despite boasting a nosebleed valuation and trading within a few dollars of its all-time high, I still think it's a great time for investors to buy this fast-growing stock. Here's why. 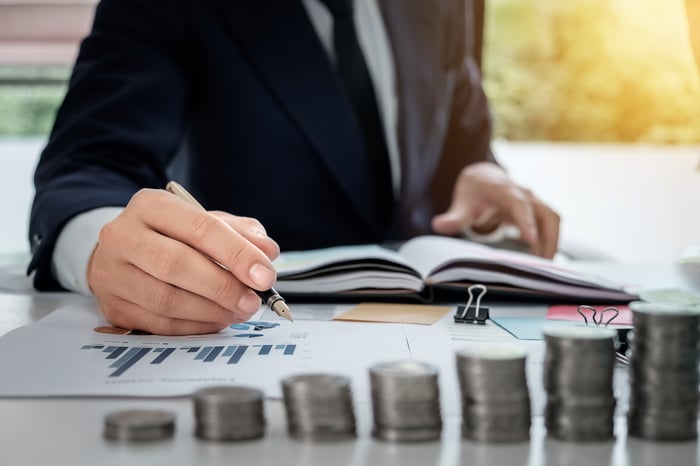 Health insurance premiums have been rising at a breakneck pace for more than a decade in America. This endless inflation has forced consumers and employers alike to search for ways to contain their costs.

To help offset that burden, the U.S. government introduced health savings accounts to the market in 2003. These accounts offer a triple-tax advantage that makes them an easy choice for eligible employees. And the amazing tax advantages provided by HSAs have caused their popularity to skyrocket: More than 23 million Americas now have HSA accounts, which collectively hold more than $50 billion in total assets.

Standing apart from the crowd

While the tailwind for HSAs in general has been strong, no company has prospered as much from the trend as HealthEquity.

HealthEquity operates a web-based platform that provides employers, health plans, and individuals with services and resource that allow them to get the most value out of their healthcare spending. Consumers can use the company's website to compare prices for healthcare service and shop around for the best deal. The company also makes it easy for employers to get the word out about HSA accounts so that employees actually start to put money away.

Another way that HealthEquity sets itself apart from the pack is with its unique corporate culture. The company prides itself on providing its members with an extraordinary experience, even going so far as to give its culture a special moniker: "Purple," which is a hat tip to marketing guru Seth Godin's book The Purple Cow.

Here's how HealthEquity's CEO Jon Kessler described the company's culture to me in an interview that I recently conducted with him:

"Purple" to us means "extraordinary." Extraordinary means something that is so different from what you expected that you would be prepared to remark upon it, that you would tell someone about it. And that's what we're trying to deliver to our members.

While you're right to be skeptical about Kessler's claims, you should know that he has the data to back it up. Kessler gets stellar reviews from employees on Glassdoor.com, a site that lets employees leave anonymous reviews, and the company's customer retention rate is around 97%.

What's more, the founder of HealthEquity is former emergency room physician Dr. Stephen Neeleman. If that last name sounds familiar, it's because Dr. Neeleman's brother David Neeleman is the founder of an airline that you've likely hear of: Jetblue (NASDAQ:JBLU)

Dr. Neeleman was one of the very first employees of JetBlue, and learned firsthand how vital it is to create a company culture that is hyper-focused on servicing the customer. He decided to ingrain that customer-centered viewpoint into his company's culture from day one.

HealthEquity's laser-like focus on health savings accounts and its customer-focused culture have enabled it to stand out in the marketplace and consistently increase its share.

So how does HealthEquity make money from its users?

First, HealthEquity collects subscription revenue from health plans and employers that want to offer access to its platform to subscribers and employees. Second, the company pulls in custodial revenue for every dollar of assets that it manages. Third, consumers are charged an interchange fees whenever they make a payment. Finally, HealthEquity earns revenue from recordkeeping and investment advisory services.

For those counting at home, this business model provides HealthEquity with four unique sources of high-margin recurring revenue. That fact has enabled the company's financial statements -- and stock price -- to flourish. 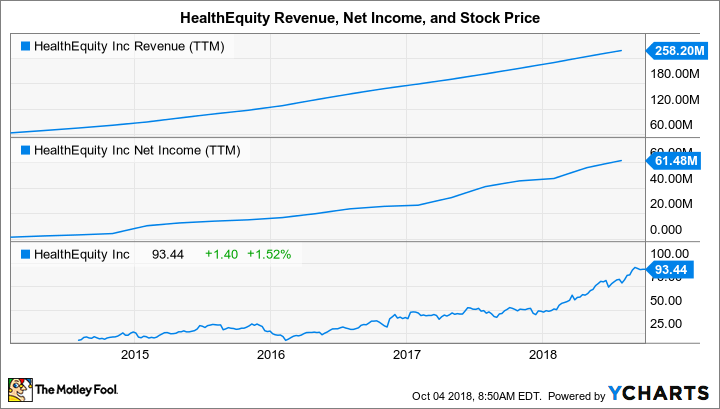 A huge opportunity ahead

HealthEquity's progress thus far has been impressive, but there's ample reason to believe that we are still in the early innings of its growth phase.

Here are a few facts that CEO Kessler shared with me that give investors a sense of the opportunity:

Compare those number to HealthEquity's current numbers of 3.4 million accounts and $6.8 billion in assets under management and it's easy to understand why CEO Kessler stated "we've got a long way to go."

Overall, HealthEquity checks nearly all of the boxes that I look for in a potential investment. Having said that, there's no doubt that Wall Street is pricing this business for growth. Shares are currently trading around 22 times sales and 68 times next year's earnings estimates, so it's possible that all of the good news has already been baked into the share price.

However, I've learned the hard way that it can be a huge mistake to let a company's valuation keep you from investing, especially when you like everything else about the business. That's why I believe that HealthEquity is a great buy today for investors who can take the long view.