Eli Lilly's spin-off of Elanco creates a new investment opportunity in a growing market, but should you jump in?

The animal health industry has proven to be attractive to growth-stock investors, with pet ownership growing and the demand for protein on the rise throughout the world. Pfizer spun out its animal health business in 2013 as Zoetis (ZTS -0.01%), and the stock has soared 208% since its first day of trading. So, it was no surprise that when Eli Lilly (LLY 0.34%) spun out its animal heath business, Elanco Animal Health (ELAN 0.69%), with an initial public offering on Sept. 20 at an offering price of $24, investors snapped up the shares, and the stock rose 50% on the first day of trading to close at $36. But is the stock a good investment going forward?

In past years, Elanco's steady business provided stability and some top-line growth as the company went through some rough years of patent expirations between 2011 and 2014. But in recent years, Lilly's human pharmaceutical business has picked up, and Elanco was more of a drag on growth than a boost. Lilly announced late last year that it would have a strategic review of its animal health business, and the result was a decision to spin it off.

The company offered 19.8% of Elanco in the IPO, selling 72.3 million shares to the public while holding on to the remaining 293.3 million shares. At the offering price of $24, Lilly raised $1.74 billion in proceeds and at today's stock price, the market capitalization of Elanco is $12.4 billion. Lilly intends to eventually separate completely from Elanco, possibly distributing its remaining interest in Elanco, currently worth $10 billion, to Lilly shareholders in the form of a special dividend. 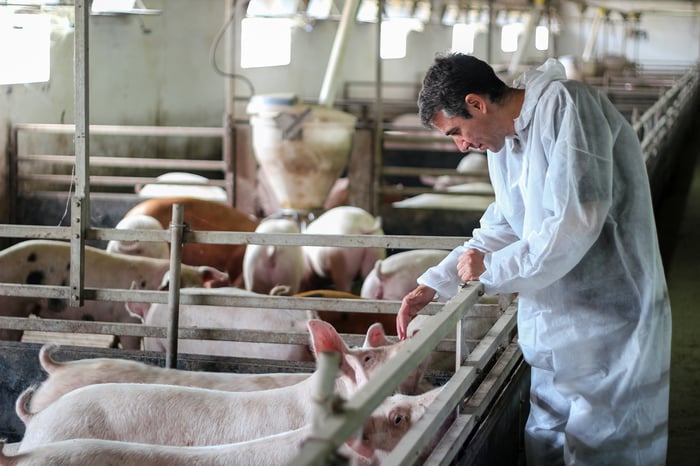 If Elanco's performance had been stellar, there wouldn't have been any reason for Lilly to spin it out. As it is, the record should raise some questions in the minds of potential Elanco investors.

The first thing that stands out when looking at Elanco's financial history is that revenue has been flat since 2015 and the company has been losing money on a GAAP basis every year for the last three years. Investors are generally willing to put up with losses as long as there is rapid top-line growth and a promise of big profit in the future, but growth has been elusive recently.

There may be solid reasons for no growth and GAAP losses, but the detail behind these numbers should cause investors to be cautious about the stock. I think there are four reasons to be wary before buying.

The biggest factor in what looks like mediocre performance by the business is the complication that has come from multiple acquisitions in recent years. Lilly has been growing Elanco by snapping up the animal health businesses from other pharma companies, including Janssen Animal Health from Johnson & Johnson in 2011, Novartis Animal Health in 2015, and the vaccine business from Boehringer Ingelheim Vetmedica just last year. In the process, Elanco has been shedding less profitable products, closing unneeded manufacturing plants, and consolidating research and development facilities.

The transactions have created large, noncash charges to earnings that cloud the real earnings picture. Elanco's business lost $311 million in 2017, but that includes expenses of $221 million in amortization of intangible assets, $162 million in severance expense, $90 million in integration costs for acquisitions, $43 million in inventory adjustments, and $32 million in facility exit costs. Stripping out all the acquisition-related expenses, Elanco suggests an adjusted net income figure for 2017 of $250.5 million, or $0.69 per share outstanding after the offering, but it's unclear how much of these costs will continue in the future and for how long.

Further obscuring the profit outlook is the fact that the operating costs used to calculate adjusted net income may not be anything like the costs Elanco will have as a stand-alone company. The costs were based on allocation of centralized resources at Eli Lilly such as information technology, finance, legal, and human resources. The flip side of "synergies" that companies tout when they make an acquisition is the additional overhead and duplication that results when a business is spun out, and Elanco's prospectus doesn't offer any insight as to what real operating costs will be after the separation. 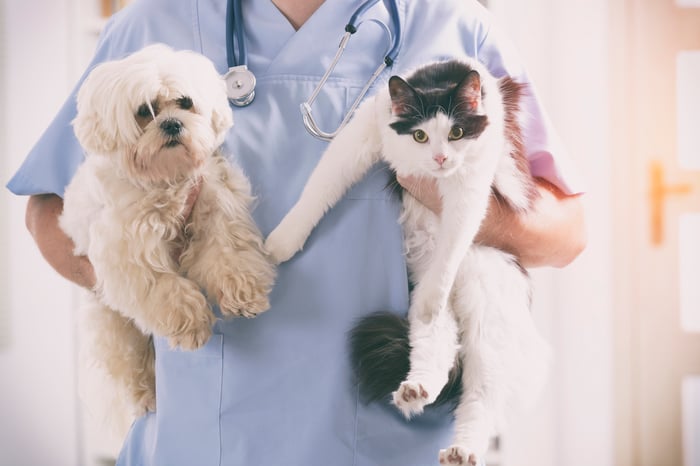 2. Competition in the pet business has been tough on Elanco

Investors familiar with Eli Lilly won't be surprised to learn that Elanco has been hurt by competition in its companion-animal business. Despite the positive outlook for industry growth, the company has blamed competitive pressure and falling prices for lackluster performance in companion-animal products quarter after quarter, and that issue was no doubt very important in Lilly's decision to initiate a strategic review of the business.

Elanco divides its companion-animal business into two categories: disease prevention, which accounted for 27.6% of Elanco's total revenue in the first half of 2018, and therapeutics, which accounted for 8.7%. From 2016 to 2017, organic growth of the therapeutic category -- revenue excluding acquisitions, strategic exits, and currency effects -- was a paltry 2%. But the bigger category of disease prevention had a decline in organic revenue of 18%, managing to register an overall revenue increase solely due to the purchase of the vaccine business of Boehringer Ingelheim Vetmedica.

Elanco is dealing with energized competition from other big companies in the space, especially in its traditional area of strength in parasiticides from entrants by Boehringer and Zoetis. The solution will lie in the introduction of new products, and the company is seeing some results from its R&D investments. Organic revenue growth in the first six months of 2018 was 8% in disease prevention and 5% in therapeutics. New products, such as improved parasiticide Interceptor Plus, Galliprant for osteoarthritis, and Credelio for fleas and ticks, are largely responsible for the big improvement in companion animal growth this year.

Patent protection is not much help to Elanco. About 75% of its 2017 revenue was from products that did not have patent protection. What helps is continual innovation in treatments and delivery methods, which will be a high priority for investment by the stand-alone company. It is currently working on 36 new product innovations that could result in launches through 2023. Those projects represent a lot of potential, but competitors are working on new products, too, so the landscape in the next five years remains an unknown to investors and therefore a risk. 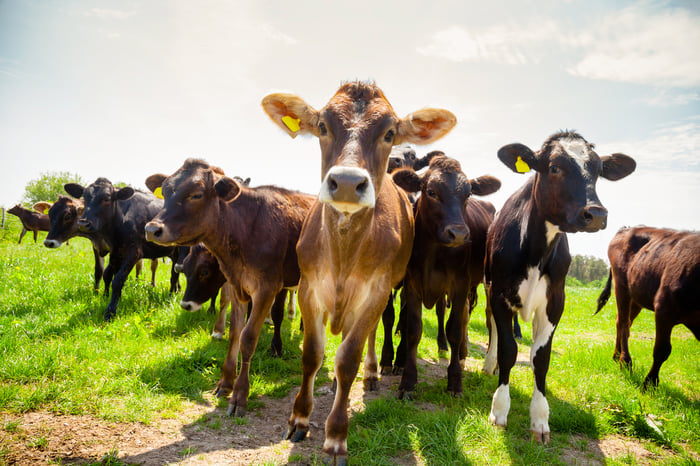 3. The food animal business has risks

The companion animal market has a number of attractive qualities to it, as owners continue to pay up for care for their beloved pets while drug suppliers don't have to worry about insurance coverage or political pressure on pricing. But one problem with Elanco relative to other animal health stocks is the fact that almost two-thirds of its revenue comes not from companion animals, but food animals, and in that space, the market dynamics are a bit more conflicted.

On the one hand, the world is seeing a growing demand for protein as the standard of living improves in emerging markets. On the other hand, in many parts of the world, there is increasing suspicion about medicines and additives that are given to food animals. Consumers are beginning to demand "clean" proteins that were produced without antibiotics, hormones, or other medicines designed to enhance animal growth. That trend is a big threat to Elanco's business.

From 2015 to 2017, Elanco's revenue from shared-class antibiotics fell at a compound annual rate of 7%, while sales of animal-only antibiotics grew 4% annually. This year the situation has improved, with first-half sales of shared-class antibiotics flat and those of animal-only products growing 9% exclusive of currency effects. But the potential for new regulations and rising consumer demand for antibiotic-free protein, especially in North America, puts a large portion of Elanco's revenue at risk.

Sentiment against antibiotic use in animals isn't the only thing Elanco investors need to worry about. The company also sells products with ractopamine, a feed additive used to increase the rate and efficiency of muscle tissue growth in cattle and pigs. The product is legal in the U.S. but banned in 160 countries, and China won't accept pork imports that have been treated with ractopamine. Making matters worse, generic competition has hit the products featuring the additive, helping cut sales of the company's ractopamine product for beef by a 28% annual rate from 2015 to 2017.

Elanco's category it calls Food Animal Ruminants and Swine includes both trouble areas of shared-class antibiotics and ractopamine, and unfortunately is the company's biggest category at 40.7% of 2017 revenue. In 2017, revenue in the category fell 10%, and in the first six months of 2018, it is down 2%, excluding currency. A second food animal category, designated Future Protein and Health, brings together the more forward-looking product lines in animal-only antibiotics, vaccines, nutritional enzymes, and probiotics, and includes products for farmed salmon and chicken. That category, at 22.5% of 2017 revenue, had 3% growth last year and so far this year has company-leading organic growth of 12%.

As noted above, it's very difficult to get a close read on what Elanco's earnings will be as a stand-alone company. In the prospectus, it does suggest a non-GAAP, pro forma number for net income in the first six months of 2018 of $177.2 million. Annualizing that number suggests full-year earnings per share is running at about $0.97, for a price-to-earnings ratio of around 34 times.

Even with the positives of the animal health industry, that is a rather expensive valuation for Elanco stock, given its low historic growth, the uncertainties around its earnings, and the headwinds it faces in its primary businesses. Zoetis actually is cheaper, selling for about 30 times estimated 2018 earnings, even with the huge run-up in its stock price.

Wait before jumping in

Eli Lilly was smart to spin off Elanco, knowing that the market would give it a premium valuation due to the growth trends of the animal health industry. Results in 2018 so far suggest that the company's new products are taking hold and ending the stagnation that prompted Lilly's strategic review of the business.

But investors would probably be better off avoiding the stock and looking at alternatives until Elanco's financials are clearer and/or the stock is cheaper. For now, Zoetis is the better bet in this space, with a greater proportion of its business in pets, where it is growing market share, perhaps at the expense of Elanco. Zoetis has a proven track record of growth and innovation, and although the stock isn't cheap, it's cheaper than Elanco. IDEXX Laboratories (IDXX 1.57%), which specializes in animal diagnostic tests and machines, is growing faster and recently turned in a fantastic quarter, although that stock is even pricier. For investors willing to take some additional risk, IDEXX is worthy of consideration as well.