Delta Air Lines (NYSE:DAL) will kick off earnings season for the airline industry on Thursday morning. Investors already have a good idea of what to expect, as Delta updated its quarterly guidance just a week ago.

However, the real question is whether Delta Air Lines can keep posting mid-single-digit revenue per available seat mile (RASM) growth going forward. With fuel prices still rising, it will be important for Delta to demonstrate that it can drive fares steadily higher so it can stabilize its profitability by early 2019. On track for an in-line quarter

On Oct. 2, Delta stated that it was on track to report a 4% to 4.5% increase in RASM for the third quarter of 2017, despite the negative impact of Hurricane Florence on unit revenue. This caused the company to narrow its quarterly earnings-per-share forecast to a range of $1.70 to $1.80: near the middle of the initial guidance range.

Following that investor update, some analysts trimmed their third-quarter earnings forecasts for the carrier. The average analyst EPS estimate has slipped to $1.76 from $1.78 a week ago.

This may seem like an insignificant change, but investors were clearly hoping for even stronger unit revenue growth, as 4% to 4.5% gains aren't enough to fully offset Delta's year-over-year fuel cost increases. As a result, Delta Air Lines stock has fallen by about 8% in the week since it published the investor update. 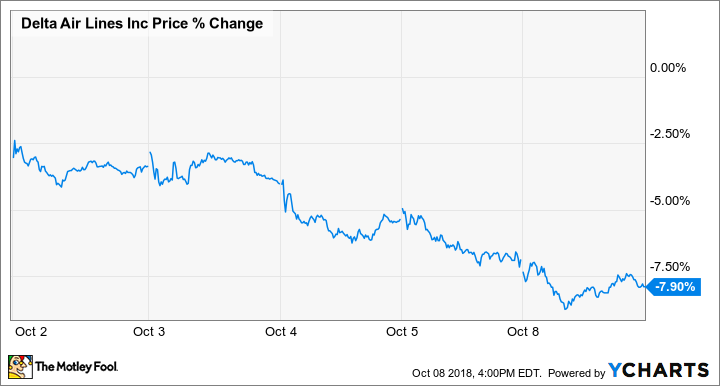 The fourth-quarter outlook is a bigger question mark

As recently as early September, Delta Air Lines executives were predicting that the carrier's pre-tax margin would stabilize in the fourth quarter. However, that guidance was predicated on a significantly smaller year-over-year increase in jet fuel prices.

Indeed, the year-over-year comparison on jet fuel prices will get easier: Delta's adjusted fuel price was $1.93 per gallon in Q4 2017, compared to $1.68 per gallon in Q3 2017. Unfortunately, oil prices have increased by about 10% since early September. As a result, Delta could easily pay $0.25 per gallon more for jet fuel in the fourth quarter of 2018 than it did last quarter.

Meanwhile, Delta will face a tougher year-over-year RASM comparison this quarter. Unit revenue rose 4.4% in the fourth quarter of 2017, up from 2.7% a quarter earlier. Investors are understandably nervous about whether or not Delta can maintain its recent pace of unit revenue growth as comparisons become more difficult. Given that the year-over-year fuel cost headwind still hasn't started to abate, it is as crucial as ever for Delta Air Lines to keep posting consistently strong RASM increases.

There are some reasons for optimism

The good news for investors is that Delta may be able to keep unit revenue growing at a 4% rate -- or even faster -- despite facing increasingly difficult comparisons. First, the carrier recently joined most of its top competitors by raising its checked baggage fees by $5 for the first and second bags.

Second, Delta trimmed capacity from its fall schedule a few months ago in light of rising fuel prices. Virtually every one of its competitors has done the same in recent months. Lower industry capacity should help airlines raise fares.

Third -- and perhaps most importantly -- airlines are all equally desperate to keep unit revenue rising in order to counteract higher fuel prices. That significantly reduces the likelihood of a new fare war breaking out.

Each of these factors should help Delta Air Lines minimize the earnings pressure from rising fuel prices. Nevertheless, investors won't rest easy until they see the company's fourth-quarter guidance on Thursday. Check back then for an update on Delta's outlook.