Stocks seesawed between gains and losses Tuesday, with the Dow Jones Industrial Average (DJINDICES:^DJI) and the S&P 500 (SNPINDEX:^GSPC) edging into negative territory in the final hour.

As for individual stocks, the sell-off in materials was triggered by a warning of lower earnings from PPG Industries (NYSE:PPG), and Aurora Cannabis (NASDAQ:ACB) is seeking a listing on the New York Stock Exchange. 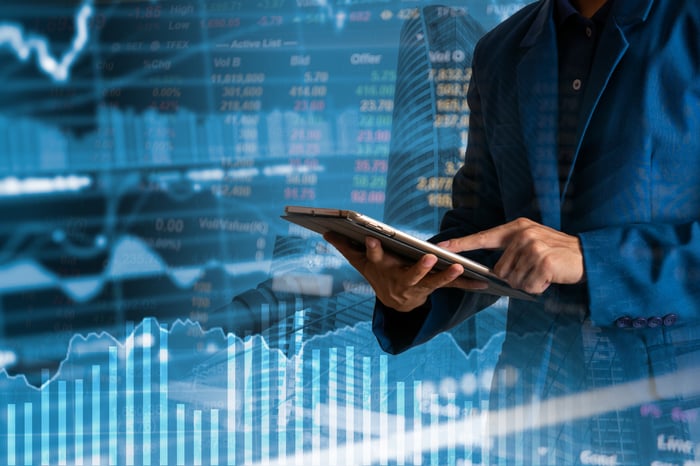 Paint and coatings manufacturer PPG Industries issued a warning that third-quarter results that will be released next week will be disappointing, and shares plummeted 10.1%. The company said that adjusted earnings per share will be between $1.41 and $1.45, well below the consensus analyst estimate of $1.58 and the $1.52 earned in the period a year earlier. Sales are expected to be $3.8 billion, a shade below the $3.87 billion Wall Street is expecting.

The company cited four factors that are hurting its business. The primary issue is cost inflation from rising raw material prices and logistics expenses. "These inflationary impacts increased during the quarter and, as a result, we experienced the highest level of cost inflation since the cycle began two years ago," said CEO Michael McGarry in the press release. It is also seeing a softening of overall demand in China, weaker sales of automotive-related products thanks to higher inventories and lower end-user demand, and a negative impact on profit from a stronger dollar.

Looking ahead, PPG doesn't see the issues going away later in the year, either, guiding to Q4 adjusted EPS in the range of $1.03 to $1.13, compared with analysts' expectation for $1.34. The company also announced it is raising prices an average of 10% on all products for original-equipment automotive manufacturers.

With the third-quarter earnings season kicking off within days, PPG raised warning flags on themes that couldn't be more sensitive with investors, including inflation, Chinese sales, and overseas demand for U.S. products that have become more expensive with a rising dollar.

Eight days before marijuana becomes fully legal for adult use in Canada, Canadian pot producer Aurora Cannabis announced it has filed an application for its stock to be listed on the New York Stock Exchange (NYSE). After the company receives the necessary approvals, it will announce its first trading date, which it expects will be before the end of October. The volatile shares closed down 2.7% today.

Aurora currently trades on the Toronto Exchange and has an over-the counter listing in the United States with the ticker symbol ACBFF. Listing on the "Big Board" will make the stock more accessible to U.S. investors, who may have to deal with brokerage fees to buy the stock on the Toronto Exchange or with high spreads between what buyers are willing to pay and what sellers are willing to accept on an over-the-counter trade. Shares on the NYSE will trade under the symbol ACB.

Aurora has been growing aggressively through acquisitions while diluting its stock in the process. The company is following the lead of other big Canadian marijuana producers like Tilray and Canopy Growth in making its shares easier to buy for American investors, who lately have been scooping up marijuana stocks like crazy.