Texas Instruments' (NASDAQ:TXN) shares have delivered market-beating returns to investors over the last decade. The company still makes calculators and chips for personal electronics, but in recent years TI has been making chips for major industries like transportation and energy, which have become increasingly more computerized. This has opened up new avenues of growth for the chipmaker.

Shares have more than doubled over the last three years, which may leave investors wondering whether TI is still a buy. Let's take a look. 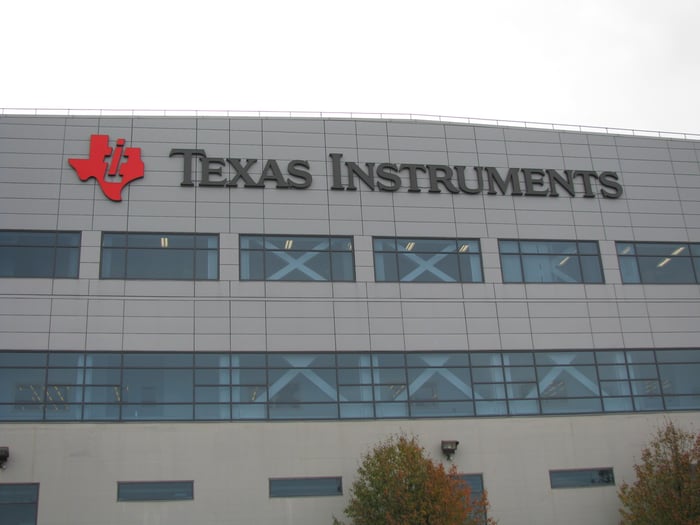 The first thing that jumps out when looking at Texas Instruments is its commitment to returning capital to shareholders. Management's goal is to return 100% of free cash flow every year to shareholders through dividends and share repurchases.

The company has increased its dividend 14 years in a row. Share repurchases have reduced the share count 43% since 2004, which has allowed earnings per share to grow 311% despite revenue increasing only 59% over the last 14 years. 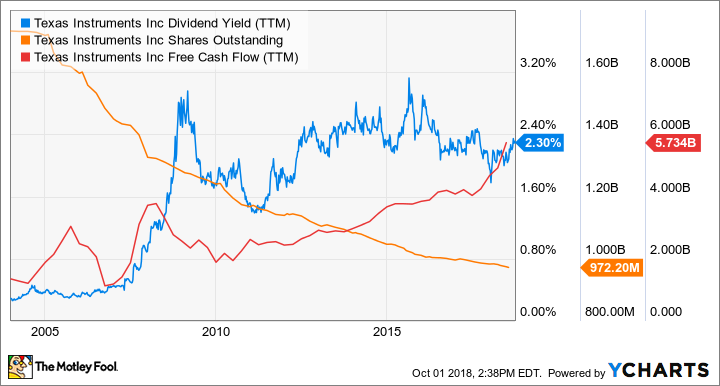 It's impressive that TI has returned so much cash over the years while still managing to reinvest in the business to maintain its competitive position. Revenue was up 9% in the second quarter as investments made in growth markets like industrial and automotive have continued to deliver solid returns for the company.

Management just hiked the dividend another 24% and authorized a new $12 billion share repurchase program based on its strong free cash flow generation.

A bet on the computerization of the global economy

Industrial and automotive are TI's fastest-growing markets, and together made up 54% of revenue in 2017. This includes chips used for factory automation, infotainment systems in cars, vehicle electronics and lighting, advanced driver assistance systems, and display panels. These are just a handful of the many applications for TI's chips.

Management believes most of the company's growth will come from industrial and automotive over the next decade. Cars are increasingly becoming more complicated under the hood, which plays right into TI's hands. Semiconductor sales to automakers have increased more than threefold to $30 billion since 1995, according to research firm McKinsey. That amount is expected to continue growing as electric vehicles and self-driving cars become more widely adopted starting as early as 2020. As a result, TI could see booming demand over the next decade.

TI has been around since 1930 and has built significant scale and cost advantages through its fine-tuned manufacturing processes.

TI manufactures most of its products in-house, allowing for tighter control over costs. This approach also gives management more flexibility to invest in new technologies that increase manufacturing efficiency over time. Currently, TI is transitioning from 200-millimeter analog wafers to 300-millimeter ones, which are 40% cheaper to make. This should significantly reduce manufacturing costs and firm up margins.

TI also maintains a cost advantage by opportunistically acquiring manufacturing equipment ahead of demand when prices are cheap. It's this constant focus of squeezing more efficiency and profit out of operations that allows TI to generate a growing stream of free cash flow that it can distribute to shareholders.

Texas Instruments is a buy

There's really nothing stopping TI right now. The company has gained share in the analog and embedded processing markets over time, and it seems to be getting stronger.

As more of TI's revenue shifts toward sales into the industrial and automotive markets, its ability to generate free cash flow should only get better. These markets have longer product life cycles, a wide variety of applications, and they are less capital-intensive.

Analysts expect the chipmaker to grow earnings 14.4% over the next five years, which is consistent with TI's five-year growth rate of 13.5%. With a forward P/E multiple of just 19 times this year's expected earnings, the shares are not expensive relative to recent and expected growth.

There are not a lot of tech stocks that offer TI's level of growth and a dividend yield of 2.9%. It's one of the most shareholder-friendly companies out there, and appears to be well-positioned to benefit from new technology sweeping across major sectors of the economy. That makes Texas Instruments is a compelling buy for the long term.