Sears Holdings (NASDAQ:SHLDQ) is running out of track. The troubled retailer has been a runaway train of woe for years as customers fled and sales plummeted, but it has managed to avoid running off the rails primarily because chairman and CEO Eddie Lampert has continuously loaned it money to keep the lights on.

But now Sears is nearing the end of the line. The Wall Street Journal reports Sears has hired advisors to prepare a bankruptcy filing and added a restructuring expert to the board of directors, and Lampert is reportedly refusing to extend the retailer additional funding. Sears has a $134 million loan payment due on Monday, meaning it's roaring into the bankruptcy station at full speed. 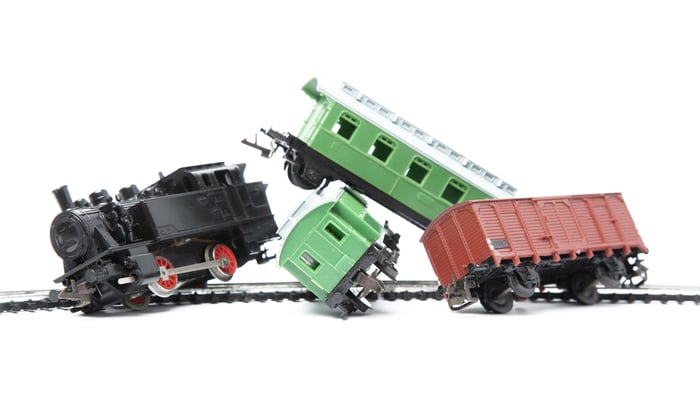 Out of money, out of time

Over the past few weeks, Sears reportedly began missing payments to vendors. That was something the retailer and Lampert had wanted to avoid at all costs because of the havoc it would wreak heading into the Christmas season. Lampert had previously extended loans to Sears several times in a bid to calm the nerves of suppliers and vendors so they wouldn't jump ship, although some did anyway.

Instead of pitching in more of his own money now, Lampert's been working to try to secure financing from institutions other than his own hedge fund, ESL Investments. Reuters reports negotiations with Bank of America (NYSE: BAC) and Wells Fargo (NYSE: WFC) fell through as Lampert sought to arrange debtor-in-possession financing. Basically such reorganization efforts allow existing management to continue operating the train. But rumor has it lenders are not willing to give Lampert free rein anymore and are pushing for a Chapter 7 bankruptcy filing that calls for Sears to be liquidated, rather than the reorganization that Chapter 11 allows.

It would be a sad end for the once-venerable department store chain, which, unlike other bankrupt retailers, would seem to have little chance of being resurrected because the Sears brand is so damaged and has little if any value in the marketplace.

Silver lining for some

Because Sears still has extensive real estate holdings, shopping malls could feel the impact, though it could be a good thing. Sears pays rents far below market rates, and malls would be able to turn around and rent the properties at higher rates.

Real estate investment trust Seritage Growth Properties (NYSE: SRG), which Sears spun off a few years ago, has been doing just that. Seeded with hundreds of Sears properties at the separation, as Sears has closed stores, Seritage has been able to raise rents threefold to new tenants.

The remaining properties Sears has might not be in such prime locations, but you likely won't find the shopping malls that house them crying for too long if Sears and Kmart go out of business. Most customers stopped shopping its stores a long time ago, so they won't miss it either. But if bankruptcy does come -- and at this point, it looks inevitable -- it remains a sad chapter in a formerly storied history.

Is This the End of Sears Holdings? @themotleyfool #stocks $SHLDQ Next Article
Current