The powerful typhoon that lashed Macau last month had a serious impact on the territory's casino industry, sending gaming revenues down 17% from August, and causing analysts to rethink their full-year growth estimates.

Although Typhoon Mangkhut caused little physical damage to Macau's resorts, it wreaked havoc on September revenues, which came in at almost 22 billion patacas, the local currency, or about $2.7 billion. While that was 2.8% higher than the year-ago figure, it was well below the 6% to 8% increase analysts expected when originally calculating the hit revenues would take from the storm.

Typhoon Mangkhut was the first time regulators shut down all casinos operating in Macau, but the 33-hour closure also exposed greater weakness in the region's VIP gambling market, and analysts are assessing what that means for the fourth quarter and beyond. 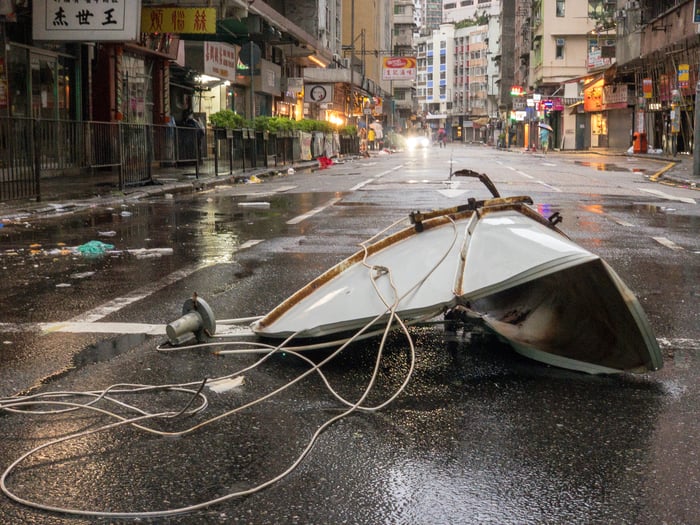 Growth is winding down

Share prices among Macau casino operators have declined in the days since September's results were announced. Wynn Resorts (NASDAQ:WYNN), which derives over 70% of its revenues from Macau, is down 5% so far in October, while MGM Resorts (NYSE:MGM) and Melco Resorts & Entertainment (NASDAQ:MLCO) are each down 6%. Las Vegas Sands' (NYSE:LVS) share price has proved to be the most resilient -- it's only down 1% so far.

Just over a year earlier, Typhoon Hato had lashed Macau, killing 10 and injuring hundreds, and the territory's government faced heavy criticism for its delayed reaction. This, in part, was why officials chose to shutter all 42 casinos for Mangkhut. For investors, it's important to recognize that this means that September's 2.8% increase in gaming revenues is a gain being measured against a depressed 2017 result. And that worrying trend may continue.

October got off to a challenging start for Macau, as its resort revenues for China's Golden Week look to be weaker than forecast. Typically, the national holiday period, which was last week, is the high point of Macau's year. This time, though, many hotels were far from fully booked despite pricing being lower than in the past. Citing data from travel sites, Bloomberg reported just ahead of the period that bookings stood at just 40% of capacity, compared to 80% in 2017. And though analysts are predicting overall gaming revenues will rise this month, the consensus forecast is for an anemic 5% gain.

Casinos started off 2018 strong, following robust gains in 2017, but as the year has worn on, gaming revenue growth has weakened (excluding an anomalous August, which handily beat expectations).

There are a few factors affecting Macau's growth, including a deceleration in the Chinese economy, and the growing trade war between China and the U.S., which will likely hit the tourism-dependent territory hard. The latest wave of resort construction on the peninsula is mostly completed as well, meaning there will be less new glitz to attract visitors. SJM Holdings' (OTC:SJMHF) Grand Lisboa Palace will be one of the last new integrated resorts to open its doors -- that debut is anticipated to arrive in late 2019 or 2020.

Also, the new casinos that have opened in the Cotai district -- venues meant to attract more of a mass-market audience than the older gaming houses, which focused on VIP gamblers -- are cannibalizing business from the established venues. And with Japan preparing to hand out its first casino licenses, it's also likely that in a few years, new resorts in what is expected to be the world's second-largest gaming market may be luring away a share of Macau's high-roller clientele.

Another screaming uncertainty for the gaming companies in Macau is that they will all shortly have to begin the process of renewing their licenses: The six concessions all expire either in 2020 or 2022. Among the U.S.-based gaming companies, MGM Resorts will be the first up for review, followed by Wynn and Las Vegas Sands two years later.

The typhoon may have hurt September's gaming results, but the month's results also serve as a warning that there are deeper fissures beneath the surface that could soon crack open.