Shareholders of footwear company Skechers (NYSE:SKX) have had a rough year so far. While the stock market has been grinding higher until recently, shares of Skechers have plummeted more than 30% year to date. Two not-so-great quarterly reports, featuring slowing revenue growth and rising costs, have spooked investors.

Skechers will have an opportunity to erase some of those losses when it reports its third-quarter results after the market closes on Thursday, Oct. 18. The company's weak guidance for the third quarter helped trigger a big sell-off in July, so Skechers will likely need to handily beat expectations for the stock to move higher. 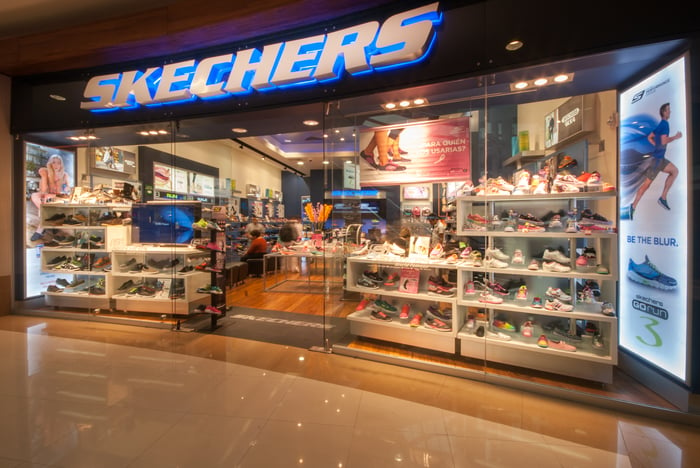 Selling, general, and administrative expenses soared 19.7% year over year, nearly doubling the revenue growth rate. Skechers attributed this expense growth to its efforts to build its international business and its direct-to-consumer channels. Those higher costs, along with legal expenses and adverse foreign exchange impacts, led to the earnings miss.

Analysts expect similar revenue growth in the third quarter, along with a less severe earnings decline:

Skechers' third-quarter guidance calls for revenue between $1.200 billion and $1.225 billion and earnings per share between $0.50 and $0.55. The company expects both the domestic wholesale business and the international distributor business to grow during the second half of the year.

Skechers received some analyst downgrades following its second-quarter earnings disaster. Wells Fargo and Susquehanna slashed their $40 price targets to $24 and $26, respectively. In September, analysts at Cowen downgraded the stock to "market perform," citing slowing sales growth and an inventory buildup.

Sales growth really isn't the problem for Skechers. Yes, sales are growing more slowly than in the recent past. Revenue soared 27% in the fourth quarter of 2017, for example. But Skechers shareholders should be perfectly happy with double-digit sales growth.

The real issue is the company's costs. Skechers is investing in its international and online businesses, and those investments are producing solid sales growth. But that growth hasn't yet flowed through to the bottom line.

The silver lining in the second quarter was an increase in gross margin. That's an indication that Skechers isn't feeling pressure to lower prices to grow sales. But it is spending heavily, mostly on general and administrative expenses, to support that sales growth.

This is all happening against a backdrop of worsening trade relations between the U.S. and China. If tariffs start putting pressure on demand for Skechers' products, a double whammy of weak sales and rising costs will hit the bottom line even harder.

The market seems unsure whether Skechers' high-spending strategy will pay off. The stock price clearly reflects that uncertainty, with shares trading for just 15 times the average analyst estimate for 2018 earnings despite continued double-digit revenue growth. If you can stomach the uncertainty and are willing to wait for earnings growth to resume, Skechers stock looks like a good deal, although another postearnings plunge certainly isn't out of the question.