Shares of PBF Energy Inc (NYSE:PBF) tumbled as much as 10.9% on Friday, joining a sectorwide sell-off that also saw refiners Valero Energy (NYSE:VLO), Phillips 66 (NYSE:PSX), Marathon Petroleum (NYSE:MPC), and HollyFontier (NYSE:HFC) take it on the chin by sinking more than 5% at one point in the day. A trio of factors seems to be driving these declines.

Goldman Sachs cut its rating on Valero Energy from "neutral" to "sell" while slashing its price target from $124 to $102. Driving that downgrade was the investment bank's view that Valero's earnings could come in 18% below analysts' consensus expectations in 2019. That's because a narrowing price spread between different oil types could squeeze refining margins. That potential for leaner margins would also affect the earnings of other refiners, including PBF Energy. 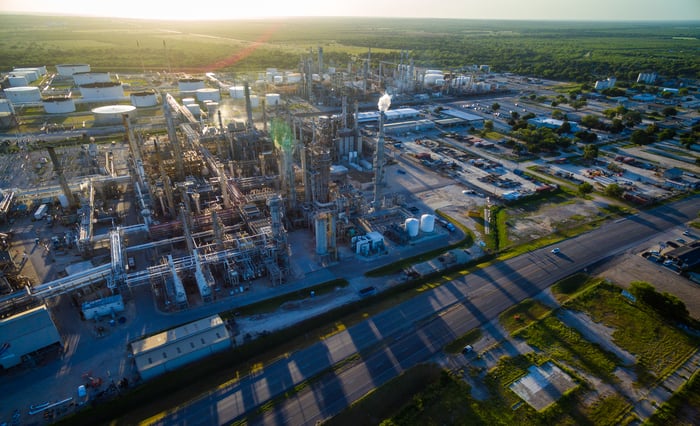 In other news relating to Valero, the refining giant agreed to acquire its MLP, Valero Energy Partners, today, paying a 12.4% premium. Analysts at RBC Capital commented on the deal, noting that it was "increasingly" expected to happen since the economics of Valero's strategy to drop down assets to its MLP were no longer attractive. That transaction could cause continued consolidation in the sector, including the possibility that PBF Energy will buy out its MLP, PBF Logistics (NYSE:PBFX). With a current yield of 9%, it's getting increasingly expensive for PBF Logistics to issue equity so that it can complete additional acquisitions from its parent. That's one reason Phillips 66 and Marathon Petroleum have shifted their midstream growth strategies toward using their MLPs to finance organic expansion projects -- they earn higher returns on investment that way than through drop-down acquisitions.

On top of all of this, a report in The Wall Street Journal said that the Trump administration might delay the rollout of a new rule that would require ships to use a higher-grade fuel. This switch will enable refiners to make more money since it would boost demand for this type of fuel. Meanwhile, a delay would push back this potential windfall.

Refining stocks have enjoyed a good run in recent years thanks to widening margins and the ability to cash in on their midstream assets by selling them down to their MLPs. However, the good times might be coming to an end. Margins appear as if they might have hit their peak, and it's getting less attractive to sell assets down to MLPs. That could cause more volatility in the refining sector in the coming months, which is why investors might want to consider buying one of these top energy stocks instead.