Income investors know just how important it is for stocks to pay dividends. One sign of a healthy stock market is that companies regularly increase the amount of dividend income they pay out to their shareholders, and recent dividend activity confirms that U.S. stocks overall have done an excellent job of rewarding their investors with higher payouts lately.

Net dividend increases among U.S. stocks totaled $19.2 billion during the third quarter of 2018, according to S&P Dow Jones Indices. Dividends have generally been on the rise recently, but as you can see below, the third quarter's boost was the biggest the market has seen in some time. 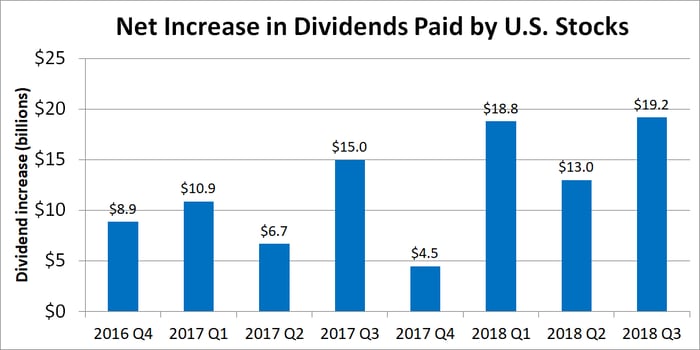 S&P Dow Jones Indices' senior index analyst, Howard Silverblatt, attributed the moves to record earnings during the first half of 2018, along with expectations for continued growth for the remainder of the year. Among S&P 500 stocks, dividend payments hit a record of $13.66 per share, up 11% from this time a year ago. That represented $115.7 billion in dividend payments just for the members of the large-cap index.

Yet interestingly, one thing is overshadowing even the record payments of dividends: stock repurchase activity. As Silverblatt explained, "Though record amounts have been paid in dividends and buybacks, buybacks appear to be favored, as dividend payouts [as a percentage of reported earnings] have declined, and are estimated to tick down [in the future]."

The key takeaway from the latest numbers is that U.S. companies are flush with cash, and they've been more likely to return it to their shareholders through either dividends or stock repurchases than to invest it back into their own businesses. That might paint an uncertain picture for growth investors, who'd prefer to see companies find ways to use their working capital more effectively, but for those who rely on income from their investment portfolios, the news couldn't be better.

A Foolish Take: The Bull Market for Dividends Is Still Strong @themotleyfool #stocks Next Article
Current