It's all too easy for investors to fall into the penny stock trap. The allure of mind-boggling overnight returns is too much for many investors to ignore, yet the outcomes of these high-risk investments are often painful. Rather than falling into the penny stock trap, three Motley Fool contributors think Baozun (NASDAQ:BZUN), Veoneer (NYSE:VNE), and Bank of America Corp. (NYSE:BAC) all offer substantial upside with much less risk.

Jeremy Bowman (Baozun): Penny stock investors probably have a higher risk tolerance than most investors, as penny stocks are known for their high volatility.

Therefore, one stock that should appeal to penny stock hunters is Baozun, an e-commerce solutions provider in China. Baozun is often compared to Shopify, but Baozun offers even more services than its North American counterpart, providing IT management, warehousing, fulfillment, and customer service, among others to multinational companies like Microsoft, Starbucks, and Nike.

The Chinese e-commerce market is ripe for growth and Baozun is taking advantage. Total revenue increased 30.5% to $175.2 million in the most recent quarter, but growth in services revenue was the real highlight, as that segment posted 51.6% growth to $88 million. Baozun has been pivoting from direct selling, and operating more as a third-party e-commerce service provider, which generates higher margins. For instance, operating income jumped 55% in the second quarter to $8.8 million, while operating margin expanded from 4.2% to 5%. The good news for investors is that operating margin should continue to expand as services revenue, which makes up only half of total revenue, continues to take share and becomes the majority of the business.

Investors can also be reassured by the fact that Alibaba is a major investor in Baozun and the company has partnerships with both Alibaba and JD.com, the No. 2 e-commerce business in China. Now also looks like a great time to buy, as shares are down nearly 50% from their all-time high in June on trade tensions between the U.S. and China. Shares could pop if the company delivers another round of strong results when it reports earnings next month.

Daniel Miller (Veoneer): Investors looking for the next big penny stock win are likely drawn in for the high-risk, high-reward aspect of those stocks. However, penny stock investments often end poorly for investors, which is why you'd be far better off investing in a stock such as Veoneer, as it has a chance to massively reward investors over the long term.

If you haven't heard, driverless vehicles are on their way and will likely be here sooner than you realize. It's a lucrative economy that Intel predicts to generate $7 trillion annually by 2050. That's what makes Veoneer intriguing as an investment: The company manufactures active safety products such as automotive radars and cameras for driver assist systems. It also produces night-vision systems, positioning systems, and restraint control systems. Essentially, Veoneer's products and technologies will help bring about driverless vehicles and the companies developing driverless fleets will need Veoneer.

Veoneer already boasts a handful of important partnerships and joint ventures, which will help drive its product development. Earlier this month it announced its Zeus supercomputer, designed for level 4 autonomous driving. It developed the product with two key partners, Volvo Cars and NVIDIA, and further establishes the company as the world's largest pure play for advanced driving assistance systems and automated driving, perfect for investors with a high-risk, high-reward mind-set.

Ultimately, the driverless future will be lucrative and investors who can pick winning companies will be well rewarded. And while there's substantial risk picking driverless stocks this early in the story, if Veoneer continues to develop market-leading products with key partners, it's a far safer investment than penny stocks, and still potentially lucrative. 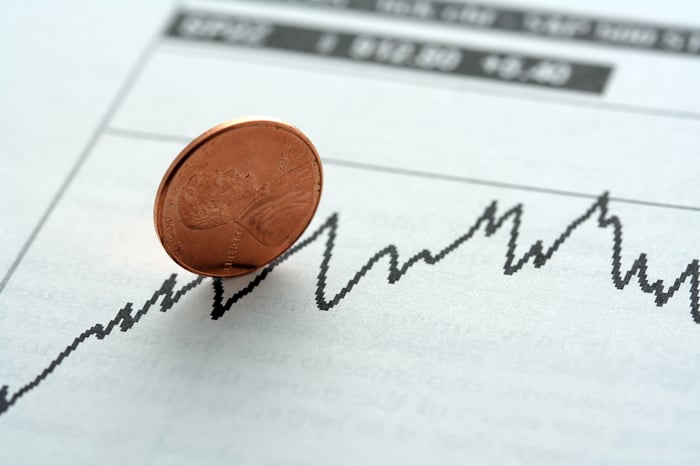 Not your average big bank

Jordan Wathen (Bank of America): This megabank found itself in trouble during the financial crisis because it committed a few major banking sins: It loaded up on speculative credit card loans to borrowers who had low FICO scores, and overpaid to acquire subprime lender Countrywide Financial and investment bank Merrill Lynch.

Today's Bank of America looks almost nothing like its pre-crisis self. Its consumer loan book is stuffed to the brim with prime borrowers. And shareholders don't need to worry about the risk of overpriced acquisitions any longer. Bank of America is forbidden from acquiring another bank because it controls more than 10% of the country's deposits. Many banks have and will make the mistake of overpaying to acquire their competitors, but Bank of America won't be one of them because it simply can't be.

Increasingly, the megabanks are becoming more of a utility than a pure risk business. They're carrying more capital than they ever have, while simultaneously earning more from fee income. Bank of America doesn't have to swing for the fences with risk in its loan portfolio because roughly 83% of its operating expenses were covered by low-risk, fee-based sources of income in the most recent quarter. That means the vast majority of what it earns in lending flows directly into pre-tax profit. It doesn't get much better than that.