Baozun (NASDAQ:BZUN) stock has already posted rapid valuation gains, with shares up roughly 75% year to date and roughly 420% since its initial public offering in 2015. That type of rapid climb might raise the question of whether the company can live up to elevated expectations.

Big share-price gains have pushed the company's forward P/E ratio to roughly 46. What's more, the company's sales growth is slowing as it shifts its business model -- with the 14.5% year-over-year sales increase in the company's first quarter of this year representing the slowest expansion since 2014. The explosive stock gains have elevated Baozun stock's risk profile. And the potential for unexpected regulatory developments in the Chinese market, international trade disputes, and other disruptive events present real risk factors. However, I still think that investors willing to weather volatility are smart to buy Baozun. Here's why. 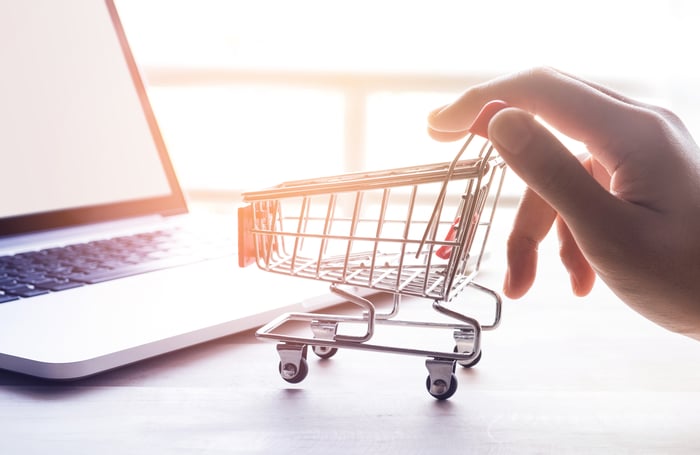 Baozun's comparatively small size when stacked against China's online-retail titans might be interpreted as a weakness, but it's actually partnered with the country's leading e-commerce platforms. Those partnerships involve being featured on Alibaba's Tmall, JD.com, and Tencent's WeChat social-media platform. Alibaba actually owns a roughly 17% stake in Baozun. And the smaller company's cross-platform integration with China's biggest online malls gives its brand partners significant incentives to stick with Baozun rather than seeking an internally built alternative or moving to a less-established competitor. The company reports that it's the market leader in its niche, with its 25% market share nearly tripling the share of its closest competitor.

So, at present, it doesn't look like Baozun is at particularly high risk of being targeted for disruption by the larger players in the industry. That doesn't mean the company won't face strong competition going forward, but it doesn't look to be at an insurmountable disadvantage because of its size.

As with an e-commerce platform like America's Shopify, Baozun should also benefit from high switching costs for companies using its platform. Baozun has already emerged as a preferred service provider for major brands like Nike, Microsoft, and Calvin Klein, and once companies are on board with Baozun, they have significant incentives to stick with the service.

China remains one of the world's fastest growing major economies, with 6.8% year-over-year growth for the country's gross domestic product in 2017. The economic backdrop looks even more promising when focusing on the online retail market.

In 2017, Goldman Sachs published a report suggesting that the country's online retail market would be worth $1.7 trillion in 2020 -- a 15% increase from a previously published target. However, even that estimate might prove to be conservative. Growth for the retail market is beating expectations in 2018, with total first-quarter retail sales up 9.8% compared to the prior-year period, and online-retail sales up 35% year over year according to China's National Bureau of Statistics.

It's worth pointing out that some investors are skeptical about the country's official economic growth figures, but the overall economic backdrop for Baozun's business is almost undeniably favorable.

Margins are poised for growth

Baozun breaks down its business into two main segments: product sales and services. The product-sales segment includes orders placed through its platform that are stored at the company's warehouses and shipped to consumers, while the services segment includes the company's non-distribution offerings. As might be expected, the services business is significantly more profitable.

Services grew sales 50% year over year to make up roughly half the company's revenue for the quarter -- a shift in per-segment sales contribution that pushed operating margin from 1.9% in the first quarter of 2017 to 2.9% in 2018's comparable period, and helped increase net income rise 87%.

The flip side of this transition is that sales growth will likely be lower than the company's historical average in the near term. But there's still room for revenue expansion as the company adds new brand partners and sales through its online stores increase. Same-store sales in the company's last quarter climbed 55% year over year, while total gross merchandise volume (GMV) increased 66% year over year, and non-distribution GMV increased 84% compared to the prior-year period.

In the company's May earnings call, CEO Wenbin Qiu mentioned that he has teams working on a next-generation e-commerce shop front. What exactly that feature will entail is somewhat unclear, but he mentioned that this new product is expected to improve the business' ability to quickly build custom online stores and integrate them with social-media platforms. Baozun is also developing and deploying artificial intelligence technologies to help brand partners identify, and tap into, trends and to reach the customers most likely to be receptive to their offerings.

While Baozun is currently focused on building out its platform for large Western brands, the company also has opportunities to bridge its service offerings for Chinese brands and small businesses. To what extent the e-commerce-platform provider will pursue those endeavors remains unclear. But they're feasible avenues to further power the company's growth engine, and could dramatically expand its addressable market.

The company's share price has recently seen some volatility, with movement at least partly tied to wavering perceptions of the risk of a trade war between the U.S. and China. As a business that thrives on bringing Western brands into the Chinese market, trade disruptions could present a significant roadblock to Baozun's growth. However, even with trade-relations risk factors, threats from competitors, and the big stock-price hikes in mind, I think Baozun still presents an attractive opportunity for long-term investors.