5 charts showing why this stock is still a buy at all-time highs.

In October, shares of e-commerce platform-provider Shopify (SHOP -3.90%) dropped to $92 per share after short-seller Andrew Left criticized some minute aspects of the company's marketing program. So far, anyone who has followed his advice has been in a world of hurt: shares are up almost 50% since, septupling the S&P 500's 7% return over the same time frame.

But that leads to an odd problem for investors: the stock is at all-time highs, worth over $13 billion, and has yet to turn a profit. Does that mean you should avoid it, or is it still worth buying? 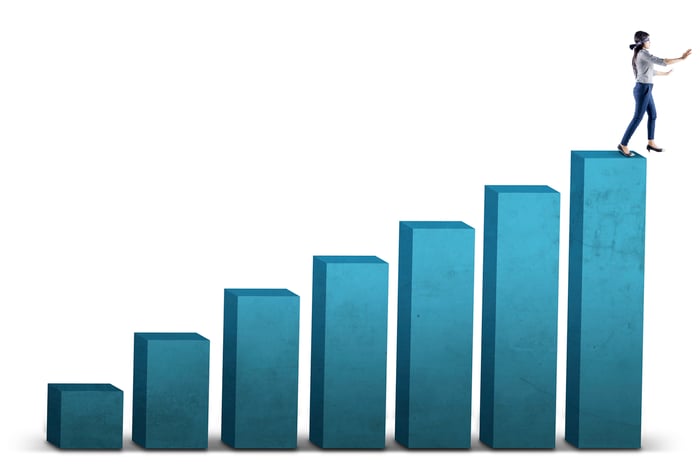 My answer to that question -- resoundingly -- is that Shopify still remains very much a buy. Here are five graphs that drive my point home.

Winning over merchants in droves

Shopify got its start in 2004 when the owner of a snowboard company wanted to find a way to sell his wares online. The options he found for building an e-commerce presence were underwhelming, so he decided to build his own.

Pretty quickly, he found out that his e-commerce platform would be a more important invention than his snowboards. That man, Tobias Lutke, is still Shopify's CEO -- and the number of companies he's helping switch to e-commerce is growing by leaps and bounds. 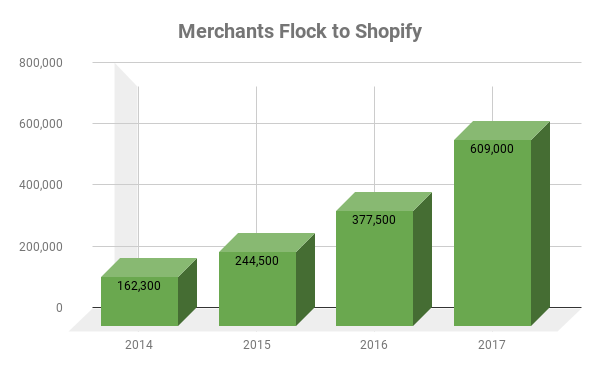 It doesn't hurt that Facebook, Amazon, and eBay -- to name a few companies -- have given up hope of creating their own platforms to rival Shopify, and have instead adopted it as the preferred development tool for third-party merchants.

This is crucial, because it leads to powerful network effects: as more merchants use Shopify, third-party app developers are incentivized to build unique tools that can only be used via Shopify. That draws in more merchants who want access to those tools, which in turn pulls in more app developers. It's a virtuous cycle creating a substantial moat.

But how can there be that many merchants?

The question of the validity of all these merchants was part of Left's short-thesis, and it wasn't without merit.

Think about it: how many merchants can there really be in the world that sell anything of value? A stay-at-home-dad who wants to start a baseball card collecting business that will quickly flare out isn't on par with a true e-commerce small business.

But -- as I addressed shortly after Left's publication -- this ignores how Shopify functions. With subscription plans that range from just $9 per month (what our hypothetical dad would probably start with) to $2,000 per month (Shopify Plus), not all merchants are created equal.

In that respect, the absolute number of merchants is only important insofar as it is essentially helping Shopify build a farm system. The $9 per month Shopify Lite is like the Single-A baseball club where only 1% will make it to the big leagues of Shopify Plus. But the wider Shopify is able to cast its net, the more likely it is that it will catch a "positive Black Swan" that ends up being a blockbuster.

To further quell shareholder doubts, there are these two vital data points: monthly billing retention rate (MBRR) has remained above 100% since 2014. In essence, this shows that switching costs are high -- adding to the company's moat.

Further, gross merchandise value (GMV) has continued growing, showing that real services and products are being bought on Shopify's platform. 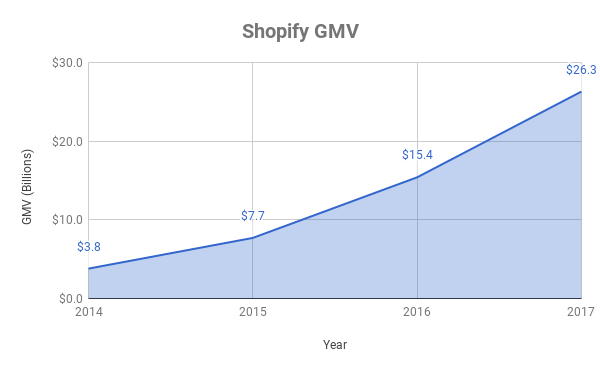 Having established that Shopify has a wide moat thanks to both network effects and high switching-costs, all we're left to do is evaluate what the company actually brings in. Here again, trends are impressive. 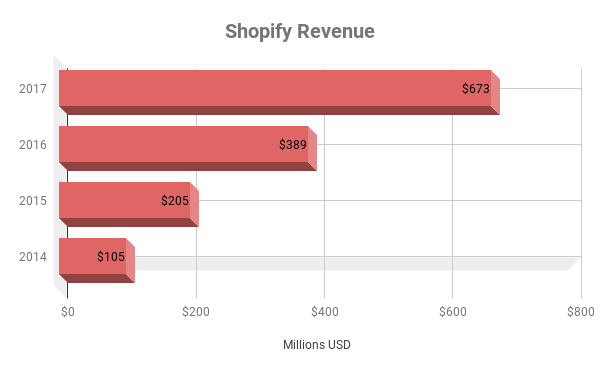 Detractors will be quick to point out that Shopify has yet to ever turn a profit, and they're right. That said, I think it would be foolish for Lutke to hit the brakes now when we know that every business Shopify latches into its ecosystem is likely to stay for the long-run.

And if we look at the company's gross profit from both its subscription-based revenue and its success-based Merchant Solutions, we see marked improvements in margins. 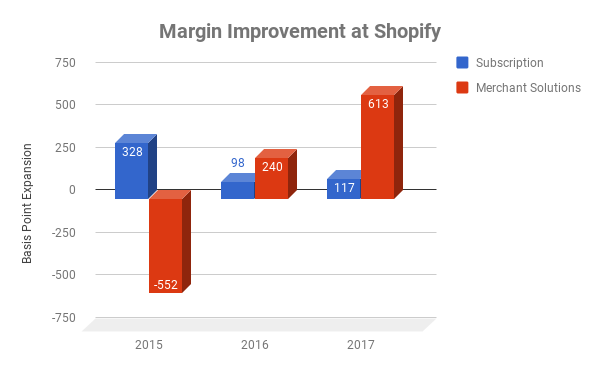 Data source: SEC filings. Note that this does not include the impact of stock-based compensation.

It's important to note that gross subscription margins are far higher -- 80.24% in 2017 -- than Merchant Solutions, which clocked in at 36.20% last year. That said, after a round of investments in 2015 that cut down on the latter's returns, both segments have been moving toward providing steady cash streams.

At the same time, the costs associated with doing business have fallen dramatically in the last four years. 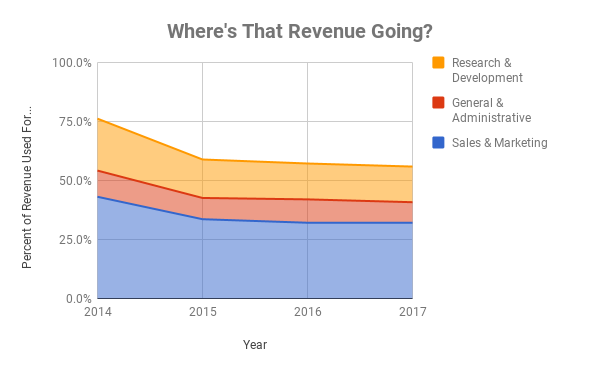 Data source: SEC filings. Note that 2014 costs come from the trailing twelve months for the company as of March 2015.

Taken together, this means that operating costs have gone from eating up 76.2% of revenue in 2014 to 55.8% last year. As the company continues to benefit from economies of scale, that percentage will go down -- and the cash coming in should balloon.

To be clear, I'm not going out and buying Shopify right now. That's not because I don't believe in the stock. Rather, it's because it's already accounting for 5% of my real-life portfolio and I'm waiting until I have more cash to invest before adding. That being said, the very act of continuing to hold is an indication that I have -- and will continue to have -- my skin in the game.

If you're a long-term shareholder who understands the company and can handle volatility, I suggest you consider doing the same.