After the stock crashed earlier this year, is now the time to buy the RFID expert?

Impinj, Inc. (PI 2.94%) has had a rocky road during its brief time as a public company. The radio-frequency ID (RAIN RFID) specialist had its IPO at $14 in July 2016, and ran all the way up to nearly $60 in its first year of trading. However, shares have crashed since then, bottoming out at $9.95 this year as customers scaled back on orders and the company endured an investigation related to an employee complaint, though the subject of the complaint was unclear. The audit found no foul play.

Impinj has now suffered three straight quarters of declining revenue due to customer softness; the company is forecasting a return to growth in its next report, but with revenue rising just 3%. Let's take a look at the buy and sell arguments for Impinj. 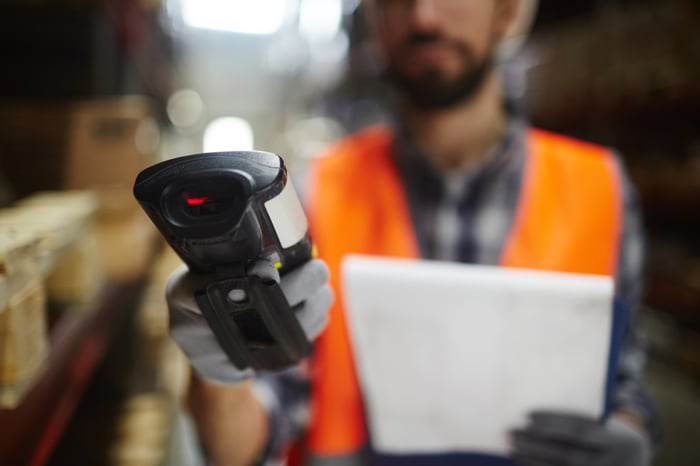 Though Impinj has only been on the public market for two years, the company was founded in 2000, and is the market leader in RAIN RFID. The company believes itself to be the leader in endpoint integrated circuits (IC), the components in an RFID system attached to items that allow them to be tracked. Unlike competitors, Impinj offers a comprehensive suite of services that provides software, connectivity, and endpoint ICs, giving it a competitive advantage. Impinj's products are used in industries from retail to healthcare to logistics, helping companies save money and operate more efficiently.

Impinj has shipped more than 25 billion endpoint ICs today, and the company should be a long-term winner if RFID continues to grow. And the technology has a variety of uses: Retailers use Impinj products for things like inventory management and loss identification, while hospitals use it track equipment and shipping companies use it for delivery verification, among other things.

With the stock still down 37% so far this year, the sell-off arguably presents a buying opportunity, especially with the company returning to top-line growth. Though the company doesn't currently have any profits, if you believe in the company's long opportunity shares seem reasonably priced at a price-to-sales ratio of 4.8.

While a market leader in an emerging technology is generally attractive, there are significant risks to Impinj, as investors who bought the stock at its peak already know.

First, RFID may not be the breakthrough technology that bulls hope it is. By the year 2000, 1,000 RFID patents had already been filed.Like most technologies, RFID continues to improve -- but this isn't a product like the smartphone that has exploded in the decade following its invention. The fact that Impinj, the market leader, recorded revenue of only $125 million last year, 17 years after its founding, signals that either the market for RFID is relatively small, or adoption is simply moving abnormally slowly for a new technology.  From 2013 to 2017, Impinj's revenue grew at a compound annual rate of 23%, showing solid but only moderate growth -- and that doesn't include this year's revenue slide.

In fact, Impinj even acknowledges in its own 10-K that RAIN market adoption has historically been slower than expected. RAIN RFID competes with technologies like drones, robots, and other sensors that can scan inventory, and there is a significant risk that it will get leapfrogged by a competing technology. For instance, when Amazon opened its first cashierless Go store, Impinj stock jumped on rumors that the e-commerce giant was using its tags. However, Amazon's store concept instead relies on a system of cameras to track customers taking items off shelves.

Furthermore, Impinj's recent struggles are concerning since the economy and retail sector are as strong as they've been in at least a decade. Apparel retailers have been the earliest adopters of RAIN technology, so it's strange to see Impinj struggling at a time when apparel retailers are posting strong growth. If a recession hits, the company's growth will likely tank; RFID systems are expensive to implement, so retailers would be unlikely to do so during a down economy. The next recession could also put a number of apparel retailers out of business given the broader risks that brick-and-mortar chains face.

Finally, interest in RFID and the Internet of Things seems to be fading among investors and the general public. Internet search activity metrics show fewer searches of the terms in recent years, with a brief 2016 spike in Internet of Things searches linked mostly to a hacking attack. Investing trends often mirror search trends, so it looks like the market has cooled off on both areas.

Given the risks above, I think investors are best off staying away from Impinj. Though RAIN RFID is clearly a valuable tool for businesses across a number of industries, there are too many yellow flags with this stock. It's still operating at a loss, revenue growth seems uncertain given its record over the last three quarters, and it faces a number of competing technologies that could further slow market adoption for RAIN RFID.

Until the company can demonstrate more consistent growth and clearer adoption of its technology, the stock is likely to struggle.