Google has enjoyed strong quarterly sales, but Amazon is still the top dog.

It should come as no surprise that Amazon.com ( AMZN -1.81% ) utterly dominates the installed base of smart speakers in the U.S. The e-commerce giant was able to successfully leverage its first-mover advantage and rapidly expand its smart speaker portfolio to address a diverse range of price points, ensuring there was something for everyone. It's true that Alphabet ( GOOG -0.58% ) ( GOOGL -0.60% ) subsidiary Google has gained considerable traction recently, with Strategy Analytics saying that the Google Home Mini was the best-selling smart speaker in the second quarter.

Google may be catching up in terms of quarterly sales, but Amazon is still the top dog by far when it comes to the installed base. 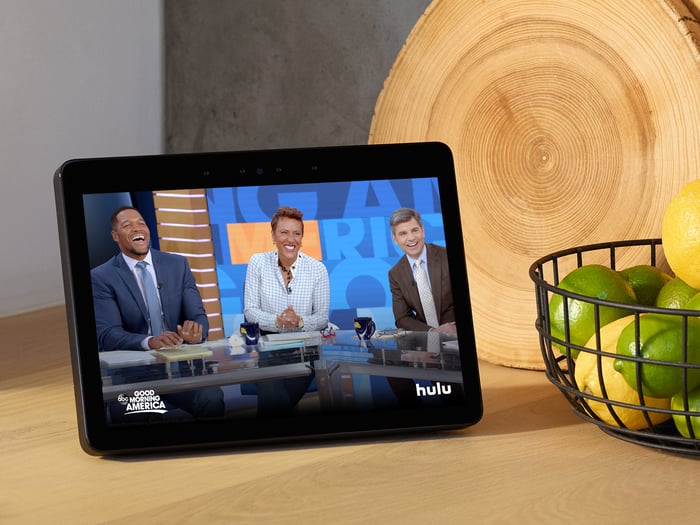 Amazon has a 63% overall share of the installed base

Strategy Analytics has just put out its most recent estimates, which are based on a survey (n = 1,011) of U.S. consumers conducted during July and August. The findings show that Amazon represents 63% of smart speakers currently in use when you aggregate all of its various Echo models. Google is carving out a piece of the market for itself, while Apple's ( AAPL -0.32% ) HomePod only appeals to buyers in the premium segment of the space. However, HomePod's position is comparable to Google Home Max, the only other device positioned in the $300-$400 range.

Interestingly, the data also suggests that many consumers do not feel tied to one particular platform or the other: 88% of respondents own an Amazon device while 31% report owning a Google smart speaker. Many smart-home device manufacturers support both platforms, allowing users to use either Alexa or Google Assistant interchangeably to control home automation. Both Alexa and Google Assistant also integrate with Spotify, covering that popular use case as well.

That has competitive implications. Users don't feel locked into a platform after initially buying into one, giving greater opportunities for companies to compete. Consider the fact that only 54% of respondents were planning on buying an Amazon, Google, or Apple device next, meaning that nearly half of the rest of the market is open to smart speaker devices from less prominent manufacturers like Bose or freshly public Sonos, among others. However, those manufacturers mostly just integrate Alexa and Google Assistant, inevitably still feeding users back into those platforms.

Another important takeaway from the results is that most people now own multiple speakers, with 58% of respondents saying they have two or more smart speakers in their homes. Getting devices into every room has always been the goal, and companies are making progress on that front (except for Apple, that is, as HomePod's $350 price point makes that an expensive proposition). For now, Amazon can keep its title as the king of smart speakers.