Shares of Dynavax Technologies Corporation (NASDAQ:DVAX), a company focused on vaccines and immuno-oncology, rose as much as 26% in early morning trading on Monday. Shares have since pulled back, and were up about 8% as of 10:25 a.m. The jump is a response to upbeat clinical data shared with investors over the weekend.

Dynavax shared data from an ongoing Phase 1b/2 study called Synergy-001 with investors at a conference in Europe on Saturday. This trial is investigating a compound called SD-101 in combination with Merck's top-selling drug Keytruda in patients with advanced melanoma. 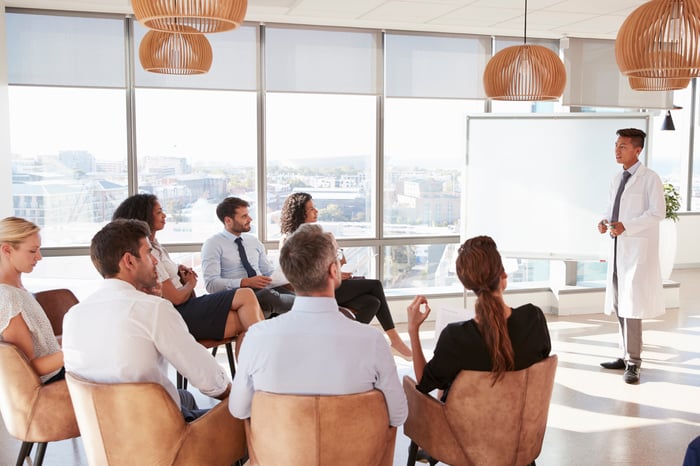 Here are the key takeaways from the presentation:

These results are encouraging because the overall response rate in the 2-mg group has remained consistent with the data presented at the 2018 American Society for Clinical Oncology annual meeting, even though the number of patients increased by more than 50 percent. In addition, median progression-free survival has not yet been reached, but statistically is expected to be at least 15.2 months, providing further validation of the potential benefit of the combination therapy. These data underscore the value of stimulating the innate immune response through TLR9 and build on clinical evidence around the proposed mechanism of action for SD-101.

Given the upbeat news, it isn't hard to figure out why traders are reacting positively today.

Today's rally should come as welcome relief to Dynavax's bulls. Shares have been in free fall for most of the year in response to a slower-than-hoped-for launch of its hepatitis B vaccine Heplisav-B. The poor sales could indicate that Heplisav-B might not be that much of an improvement over GlaxoSmithKline's (NYSE:GSK) hepatitis B vaccine in the eyes of patients and providers.

Will Dynavax's sales start to accelerate from here as providers and payers learn more about Heplisav-B? That question remains unanswered, so this Fool thinks that approaching this stock with a wait-and-see mind-set is the smart move for now.