Coming into the third-quarter earnings report, Kimberly-Clark (KMB 0.83%) investors had modest expectations for the consumer products giant's business outlook. Sales growth trends have been disappointing lately, and profits are being pinched by rising commodity costs that the company hasn't been able to pass along to customers through higher prices.

In its report released this week, Kimberly Clark wasn't able to show much progress in addressing those core challenges. The company signaled bigger changes ahead, though, as CEO Thomas Falk will be stepping down from his leadership position.

Broader trends held steady, with revenue falling in the core U.S. market and only expanding modestly in developing markets. Kimberly-Clark's profitability continued to fall due to rising input costs for commodities like plastic, pulp, and oil. 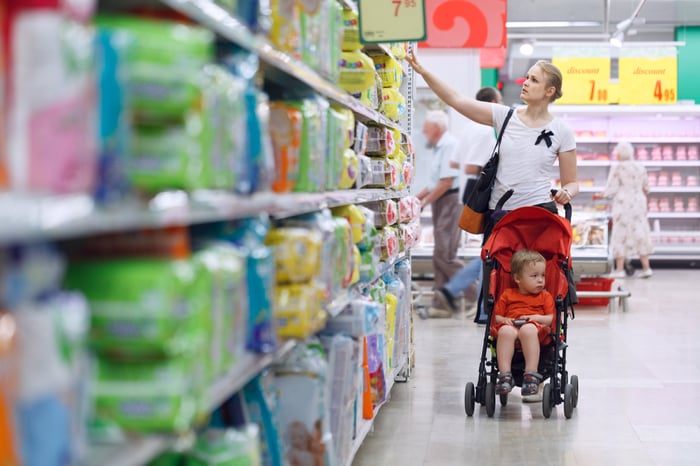 Highlights of the quarter:

CEO Thomas Falk, who announced he is stepping down at the end of 2018, highlighted the company's steady earnings performance despite major market challenges and the volatility brought on by the company's price-boosting projects. "We delivered ... organic sales growth," Falk said, "reflecting our initiatives to improve selling prices."

"While our profitability was impacted by significant commodity and currency headwinds," Falk explained, "we continue to launch innovations, pursue our growth priorities and invest in our brands for long-term success." Executives said they were especially pleased with progress in the restructuring program that, combined with cost cuts, has allowed for significant cash returns to shareholders while Kimberly-Clark reported only modest earnings declines.

Management affirmed their outlook for a 1% organic sales boost this year compared to last year's flat result. That's a bit sluggish considering P&G is targeting healthier growth of between 2% and 3%.

Meanwhile, surging commodity costs spurred a second straight minor downgrade to Kimberly-Clark's earnings forecast, as adjusted profits are now expected to fall by at least 5% rather than declining between 2% and 5%.

Michael Hsu will take over the CEO position from Falk on Jan. 1 after serving as Kimberly Clark's chief operating officer since early 2017. His immediate challenge will be to keep sales volumes steady while implementing price increases across the portfolio. The incoming CEO will have the opportunity to make bigger changes to the growth strategy, too, which may be needed given Kimberly Clark's persistent struggles in its core U.S. consumer products segment.