According to streaming pioneer's own rationale, it could currently take on another $19 billion to $26 billion in debt.

Dominant online video streamer Netflix (NFLX 0.41%) is addicted to debt. In the wake of blockbuster third-quarter earnings results last week, the company issued yet another $2 billion in paper. The offering, which includes euro- and U.S. dollar-denominated junk bonds, priced this morning at interest rates of 4.625% and 6.375%. Those yields came in at the high end of expectations, enticing bond investors.

When added to the $8.3 billion in long-term debt that the company had at the end of the third quarter, that brings long-term debt up to a whopping $10.3 billion. There's more where that came from.

Netflix has long justified its excessive use of debt with efficient capital structure theory. Specifically, the company points to its debt-to-market-cap ratio, which it considers conservative. Netflix CFO David Wells reiterated on the call last week that the company believes a ratio of 20% to 25% yields the most optimal capital structure:

That leverage ratio is going to start to improve. But we're also looking at optimal weighted average cost of capital, which we've already discussed and indicated that would be based on about a 20% to 25% leverage-to-market-cap ratio is where we think the long-term optimal cost of capital ought to be. So, once we push past a point where we're more secure, and it's less about funding the immediate working capital needs of the business. What will turn over and shift toward thinking about long-term optimal cost of capital.

After factoring in the recent bond offering and Netflix's current market cap of around $145.6 billion, its debt-to-market-cap ratio is approximately 7%. At current levels, that target ratio implies Netflix could take on an additional $19 billion to $26 billion to achieve its target capital structure.

Fixating on debt-to-market-cap ratio is wrong

This approach to capital allocation is ill-conceived for a couple of reasons.

While I fully appreciate how debt can help a company reduce its weighted average cost of capital (WACC), as debt capital is less expensive than equity capital, it's critical to recognize that debt costs are explicit (interest expenses) while equity costs (the return that shareholders demand) are implicit. Netflix has grown operating income considerably in recent years, but interest expenses have similarly risen, now eating up 23% of operating income. 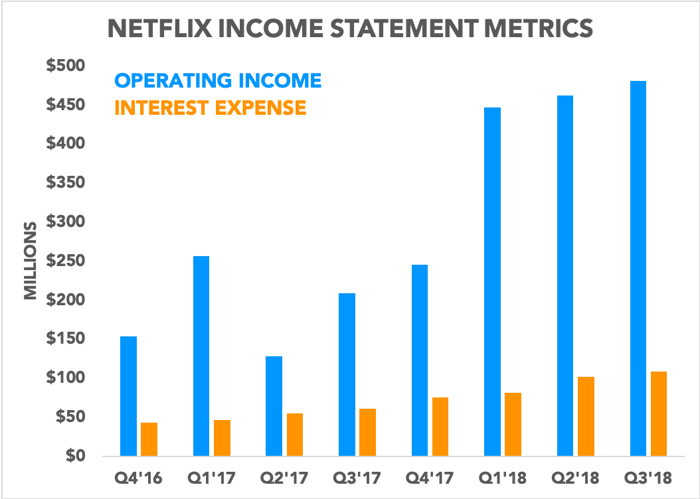 Additionally, the rationale falls apart even more when you take into account how volatile Netflix stock is. Consider a scenario where Netflix reaches its 20% to 25% target ratio, only to see shares plunge by over 25% -- which they did between June and August. The company's capital structure would then be skewed but in the opposite direction. As Netflix's equity value rises, management can try to justify ever-greater headroom for debt in pursuit of lowering its WACC on paper, but those interest costs are far more tangible than financial theory.

This fixation with its debt-to-market-cap ratio appears to be why Netflix seems averse to simply conducting a secondary offering to raise equity capital. The last time Netflix had a secondary offering was 2011, raising around $200 million. Considering the lofty valuation that Netflix shares currently sport, the dilution costs would be extremely minimal if Netflix were to tap equity markets instead of debt markets.

For instance, the company could have raised the same $2 billion that it did this week by issuing roughly 6 million shares at current prices, or just a mere 1.3% dilution of the 436 million shares currently outstanding. Besides, with shares up over 70% over the past year, the stock has undoubtedly met shareholders' return demands.