The buyout clauses in place for CVR Refining's shares mean that investors are at the mercy of the parent company.

Oil refining is the part of the industry best positioned to take advantage of North America's current oil market. Transportation constraints and bottlenecks across the country mean that crude oil prices vary wildly from region to region. Those with access to these cheaper crudes can make a killing. This past quarter, independent refiner CVR Refining (CVRR) was one of those refiners able to take advantage of this situation, and it produced expectation-crushing results.

Despite the impressive numbers CVR Refining put up this past quarter, investors shouldn't be going near this stock. Not because the business is bad -- its operations are some of the best in the sector -- but because of its current relationship with parent company CVR Energy (CVI 4.61%). Here's what happened this past quarter and why you should avoid this stock.

If we were to judge this quarter on the merits of the business alone, then CVR would be in pretty good shape. It benefited immensely from the price differences between crude oil prices across the U.S. to post a refining margin of $15.54 per barrel, which is fantastic, historically speaking. What's more, the company was able to keep its direct operating costs low -- $4.23 per barrel processed -- by maintaining high utilization rates -- 106% of nameplate production capacity.

CVR's efficient operations this past quarter meant that it generated loads of cash, which enabled management to announce a distribution of $0.90 per share for the quarter. CVR Refining is structured as a variable-rate master limited partnership, which means the payout can change quarter to quarter depending on the amount of cash generated. So, investors shouldn't anchor to this number for future payouts.

Waiting for the other shoe to drop

Back in June, parent company CVR Energy announced it was commencing an exchange offer for all shares outstanding on CVR Refining. The deal was designed to simplify its corporate structure -- especially now that the recent corporate tax cuts make it less lucrative for CVR Refining to remain as a master limited partnership.

At the end of July, management announced the results of its exchange offer, which said that not every investor had exchanged their shares. At the conclusion of the exchange offer, there were still 15.5 million shares of CVR Refining outstanding. It would appear that some investors wanted to maintain their hold on the partnership and benefit from its distributions. 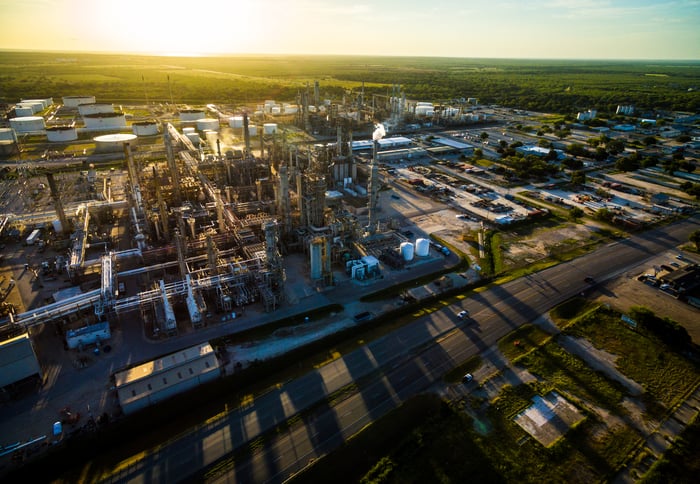 It may not matter, though, because the amount of shares CVR Energy picked up pretty much means it can do whatever it wants with CVR Refining. In the initial exchange letter, there was some language that didn't make it seem too enticing to hang onto shares (emphasis mine):

At the conclusion of the exchange offer, CVR Energy owned 84.5% of CVR Refining shares, meaning it can call those shares at any given time, at any price not less than market price, and it doesn't have fiduciary duties to remaining CVR Refining shareholders. So, if shares were to hit the skids, the parent could call in shares.

The press release goes on to say that it currently has no intention to do so at this moment, but that could change depending on where shares go in the coming months.

Management may not be acting in your best interests

This exchange offer between CVR Refining and CVR Energy makes things rather complicated for investors. The parent company would probably love nothing more than to buy the remaining shares outstanding at as cheap of a price as possible, but I doubt the feeling is mutual for CVR Refining investors.

When you invest in a company for the long haul, you want your interests to align with management's. That doesn't appear to be the case right now with CVR Refining's stock. While the most recent distribution sounds lucrative for income-seekers, this is probably a stock worth avoiding.