Nokia (NYSE:NOK) reported its third-quarter results before the market opened on Oct. 25. Sales grew slightly on a currency-adjusted basis, and the company maintained its full-year guidance despite a steep profit decline. Here's what investors need to know. 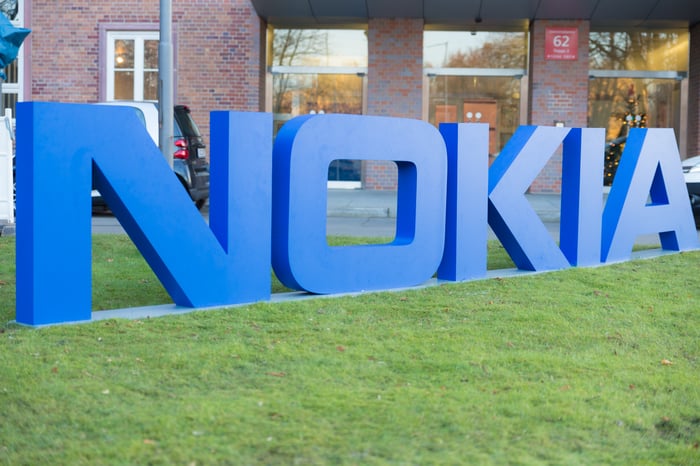 Nokia CEO Rajeev Suri laid out some risks that will arise in the fourth quarter during the earnings call: "We see some risks as we head to the end of this year with project timing and product deliveries. The orders are certainly there, but we are facing a heavy workload in the fourth quarter, given the scale of the rollouts under way."

Suri also discussed the company's new cost-savings plan: "Earlier this year, when we first shared our 2020 guidance, I noted that we saw the opportunity to further reduce costs even after the end of this year when we expect to successfully deliver on our 1.2 billion euros cost savings plan related to our Alcatel-Lucent acquisition. We have now quantified those future actions and are targeting EUR700 million in annual cost savings by the end of 2020."

Nokia maintained its full-year guidance despite an earnings decline in the third quarter and risks related to project timing and product deliveries in the fourth quarter. In the longer term, the company stands to benefit from the rollout of 5G technology. Nokia's 2020 guidance is based on expected growth in the company's addressable market, driven in part by commercial 5G deployments.

Given that margins fell in the networks business through the first nine months of the year, Nokia is going to need a solid fourth quarter to hit its full-year targets.