Amazon.com (NASDAQ:AMZN) reported third-quarter 2018 results after the market close on Thursday. As it has in the last three quarters, the e-commerce and cloud computing giant trounced Wall Street's earnings expectation.

Shares were down 7.4% in after-hours trading on Thursday. While third-quarter revenue fell a little short of the Street's consensus estimate, the main culprit for the market's reaction was surely fourth-quarter guidance. Even the high end of Amazon's revenue outlook came in somewhat less than Wall Street was projecting. Operating income guidance also likely disappointed.

Here is an overview of Amazon's quarter, along with its guidance for the fourth quarter, using five metrics. 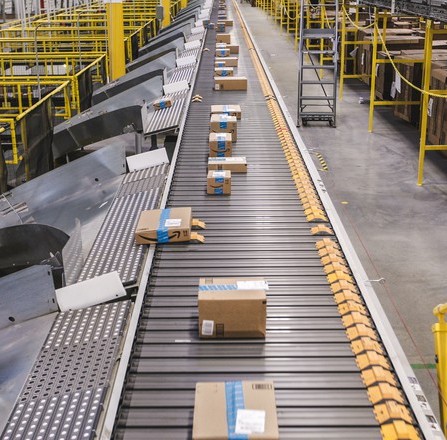 Amazon's net sales increased 29% year over year to $56.6 billion, which includes $4.2 billion from physical stores that weren't part of the company in the full year-ago period. (These are primarily those of organic grocer Whole Foods, which Amazon acquired in late August of last year.) This was a little short -- about 0.9% -- of the $57.1 billion Wall Street was expecting, though it was above the midpoint of Amazon's guidance range of $54 billion to $57.5 billion.

Here's how segment growth broke out:

While it's still growing at a torrid pace, AWS' revenue growth slightly decelerated in the quarter after accelerating for the past three consecutive quarters. In constant currency, the cloud computing service's revenue increased 46% in the third quarter, versus 49% in the second quarter, 48% in the first quarter, 44% in the fourth quarter of 2017, and 42% in both the second and third quarters of 2017.

As was the case last quarter, this quarter's big story was North America's scorching operating-income growth. Also notable is that AWS continues to get more profitable. It had a 31.1% operating margin in the quarter, up from 26.9% in the second quarter.

International's operating loss narrowed in the quarter, as it did last quarter. Investors shouldn't be concerned that this segment is posting losses. This business isn't as established as North America.

For the fourth quarter, Amazon guided for net sales of $66.5 billion to $72.5 billion, representing growth of 10% to 20% year over year. Even the high end of this range falls quite a bit short of the $73.9 billion Wall Street was looking for, and this was probably the biggest reason for the market sending shares of Amazon tumbling in after-hours trading on Thursday.

The company expects operating income of $2.1 billion to $3.6 billion, representing growth of 0% to 71%. The market was likely not enamored by this outlook, either, as it includes the possibility of no growth and represents a considerable slowing from recent quarters.

The main reason for the projected slowdown in growth in the fourth quarter is that Amazon's year-over year results will no longer be getting a boost from the Whole Foods acquisition, which closed in August 2017. Additionally, CFO Brian Olsavsky said on the earnings call that in 2018 the company changed the way it accounted for subscription revenue. This resulted in some revenue from the fourth quarter being pushed into the first through third quarters.

In short, Amazon turned in a super quarter and its long-term growth story remains intact. The fourth-quarter guidance ranges are quite wide, with the upper ranges for both revenue and operating income likely to satisfy many investors.