It's no secret that cable stocks have come under pressure in recent years. With the rise of Netflix (NASDAQ:NFLX), video streaming, and the so-called cord-cutting phenomenon, investors now view cable as a declining industry, and many have dumped media and entertainment stocks, especially cable programmers. However, the cable industry continues to generate substantial profits both for providers like Comcast (NASDAQ:CMCSA) and for networks generating content. Though cable consumption is declining, there were still 94 million pay-TV subscribers as of last year, down 7% from their peak in 2012, indicating a slow decline. In some ways, cable stocks resemble tobacco companies, which are seeing declining consumption but have been able to grow profits by passing along price increases to customers. Cable companies have similarly been able to raise prices on customers who have stuck with the bundle.

However, the same market response that has sent shares of Netflix soaring has made traditional cable networks look incredibly cheap. Keep reading to see why AMC Networks (NASDAQ:AMCX) and Walt Disney (NYSE:DIS) look like bargains today. 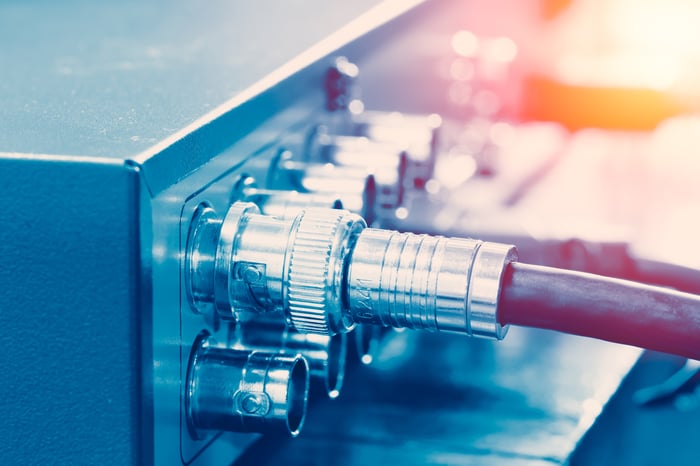 The company that has generated critically acclaimed hits like Mad Men, The Walking Dead, Portlandia, and Breaking Bad has built up plenty of goodwill with television audiences over the years. It's also one of the cheapest stocks on the market, trading at a P/E of just 7.4. In addition to its namesake network, AMC also owns IFC, Sundance, We TV, BBC America, and AMC Studios, its television production arm.

AMC's fundamentals still look sound. In its most recent quarter, revenue increased 7.2% to $761.4 million, and adjusted operating income ticked up 2% to $233 million, giving the company an enviable operating margin of 30.6%. Adjusted earnings per share rose from $1.88 to $1.93, and total subscribers increased 2% year over year, quelling concerns about cord-cutting. Management is also taking advantage of the low share price, aggressively repurchasing shares and reducing shares outstanding by more than 10% over the last year.

Though top-line growth remained slow domestically, its international division saw revenue increase 32.4% to $147 million, indicating a promising opportunity abroad. AMC is also expanding through acquisitions, as it bought RLJ Entertainment, the parent of niche subscription over-the-top services like Acorn TV and the Urban Movie Channel, and also acquired a majority stake in Levity Live, an owner of premium comedy venues, which will allow it to vertically integrate and develop talent for upcoming programming.

With an expanding portfolio of entertainment brands, steady growth, aggressive share buybacks, and a bargain price, AMC looks like a solid bet for value-minded investors.

Shares of Disney have been stuck in neutral since 2015 when CEO Bob Iger warned that ESPN, its biggest cable cash cow, was losing subscribers. However, there are signs that the stock may finally emerge from its long slumber. Assuming that its acquisition of Fox's entertainment assets goes through, the company will have a veritable powerhouse of content when it launches its long-awaited streaming network. It will have the standard Disney fare but also popular FOX franchises like The Simpsons and FX shows like American Horror Story and It's Always Sunny in Philadelphia, as well as its current library of Marvel, Pixar, and Star Wars movies. The deal will also give it majority control of Hulu, meaning it will have three streaming services including the recent launch of ESPN+.

Thanks in part to strong performances from its studio entertainment and parks and resorts divisions, Disney's overall numbers are moving in the right direction. In its most recent quarter, revenue increased 7% to $15.2 billion, driving a 5% increase in operating income to $4.2 billion, once again showing off a strong operating margin at 27.6%. With the help of a lower tax rate and fewer shares outstanding, Disney's adjusted earnings per share jumped 18% to $1.87.

In its cable networks division, which includes ESPN and the Disney Channel among others, revenue increased 2% to $4.2 billion, though operating income was down 5% to $1.4 billion, a reflection of its investments in BAMTech, which is the foundation for the new ESPN+ streaming platform.

While Disney's transition to streaming may be rocky at times, the company has an unmatched library of content and collection of brands, and together with its unique ecosystem of theme parks and consumer products that all reinforce each other, the company should continue to put up growth even in the face of cord-cutting. At a P/E of 15, the stock isn't as cheap as AMC, but it's still very reasonably priced compared to the broader market, especially for its unique combination of assets.

Though the cable industry may continue to shrink, both AMC and Disney have the brand power and content that should ensure continued returns for investors. The transition to streaming will be a long one, and both companies are making moves to position themselves for a new future while still generating bumper profits for investors.