Ten years ago, I was a full-time teacher who loved what he was doing -- but I was slowly burning out. The hours at my particular school were demanding, and my wife and I barely saw each other.

We needed to make a change. That led to a life-altering decision: Quit our jobs and move abroad -- with no plans for anything!

Of course, not everyone can do that. We were lucky in many ways -- not the least of which was that we didn't really spend that much money while teaching. But along the way, we read a lot that fundamentally changed our approach to personal finances. Below are five of the most important passages. 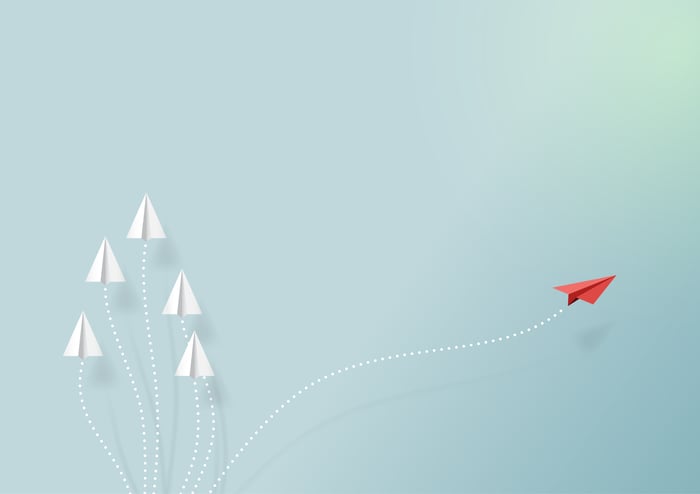 Going against the grain can be a solitary -- and liberating -- experience. Image source: Getty Images

We start with debt guru Dave Ramsey. He and I most certainly do not see eye to eye on investment and retirement practices. But when it comes to the silly psychology that can get us into money trouble, I have to give him credit where credit is due:

We buy things we don't need with money we don't have to impress people we don't like.

Ramsey gets to the core of consumer psychology. We need to understand exactly why we spend money the way we do -- which is often to our own detriment.

Yes, there are real needs to be fulfilled: safe and warm housing, food, and water. But beyond that, everything else is probably a want. And even then, the want sometimes has less to do with our internal desires than it does with wanting to impress others. It's an insidious cycle that leads to financial ruin for many.

2. The link between money and happiness

Best-selling author, former trader, and NYU professor Nassim Taleb doesn't mince words: Money won't automatically make you happy. But there's an important nuance in understanding the role money plays in our emotional and psychological lives, as he explains it:

Money can't buy happiness, but the absence of money can cause unhappiness. Money buys freedom: intellectual freedom, freedom to choose who you vote for, to choose what you want to do professionally. ... If money is the cause of your worry, then you have to restructure your life.

3. The most valuable thing in life

Former Motley Fool columnist Morgan Housel zeroed in even closer on the type of freedom that matters the most:

Most of us would be happier if we had more control over our time. And we can gain more control over our time by realizing that what used to be considered middle class -- even wealthy -- is now viewed by some as abject poverty, only because our expectations have surged. By keeping your expectations in check and not trying to keep up with your neighbor, most of us can probably retire -- or gain enough financial independence to work in a job we love -- far sooner than you realize.

That leads to a pretty obvious question: How, then, should we structure our lives? How can we make sure that we don't fall victim to the terrible consequences of hedonic adaptation?

Vicki Robin, author of Your Money or Your Life: Transforming Your Relationship With Money and Achieving Financial Independence, has a one-word answer to that enormous question: "Enough."

When you have Enough, you have everything you need. There's nothing extra to weigh you down, distract, or distress you. Enough is a fearless place. A trusting place. An honest and self-observant place. ... To let go of clutter, then, is not deprivation; it's lightening up and opening up space and time for something new and wonderful to happen.

Robin wrote her book back in 1992, but it has gained a lot more followers ever since the Great Recession. The financial meltdown led many people to reconsider their relationship with money.

The most popular of those folks is a man named Pete who goes by Mr. Money Mustache. He has become the de facto leader of the Financial Independence/Retire Early (FIRE) movement. And he draws an important distinction when it comes to this burgeoning trend: It's not about not working. As he explains:

Everybody uses the FIRE acronym because it is catchy and "Early Retirement" sounds desirable. But for most people who get there, Financial Independence does not mean the end of your working career.

Instead it means, "Complete freedom to be the best, most powerful, energetic, happiest and most generous version of You that you can possibly be."

Here's why that's such an important distinction: It changes your mind-set from one of avoidance (of "work") to one of seeking and approaching (of freedom). It might sound like a minor difference, but over time, it's a game changer.

If you spend your adult life working to avoid work, that's a recipe for disaster. It drives you further away from curiosity and gratitude -- the only two traits that lead to lasting growth and contentment. If, on the other hand, you are working to approach freedom, you'll be endlessly curious about how to get there, and grateful for whatever opportunities arise as a result.

Perhaps these five quotes, combined in this order, seem a little Pollyanna-ish. You don't have to live them out every minute of every day. But by using them as guideposts, they can vastly improve your relationship with your own personal finances.