The Food and Drug Administration (FDA) may be ready to drop the hammer on tobacco companies by forcing them to produce cigarettes with virtually no nicotine. Although the agency has been mulling whether to impose a strict new limit, no new pronouncements have been issued. However, an agency staffer recently gave a presentation that suggests the FDA could be readying a decision with potentially severe consequences for Big Tobacco.

Tobacco companies say manufacturing cigarettes with extremely low nicotine levels could result in significant negative impacts, including massive job losses, closed businesses, and lost tax revenue. Giants like Altria (NYSE:MO) and British American Tobacco also contend there is no science to back up the position that the dramatically lower nicotine levels the FDA is considering are even effective, let alone commercially viable. 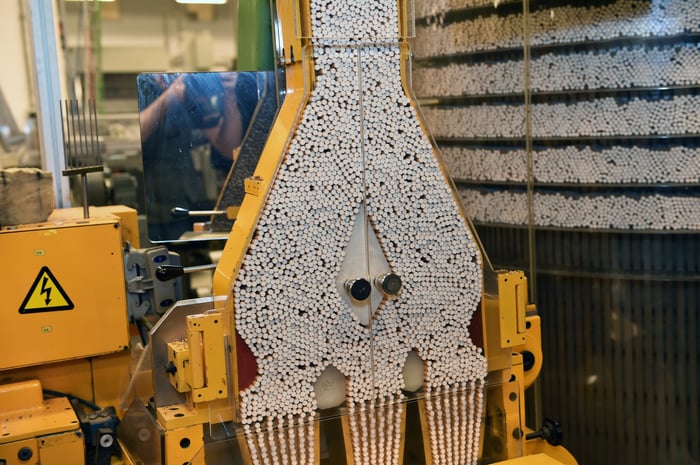 But the agency looks like it might be circling the wagons on those latter points. The FDA's Center for Tobacco Products hosted a webcast presentation earlier this month that presented the literature the regulator has been reviewing "on the likely effects of reducing nicotine in combusted tobacco," as well as what consumer reaction might be, based on its experience.

It said that while the public needs to be educated more on the benefits of a new standard before one is introduced, the data it has seen suggests the new standard could generate numerous benefits, including reduced addiction levels, fewer cigarettes smoked daily, and more smokers who actually quit.

So while a new standard might not be on the horizon just yet, it seems clear the FDA will have one sooner rather than later.

How low is low?

The FDA can't ban cigarettes. The Family Smoking Prevention and Tobacco Control Act, which gave the agency the power to regulate tobacco, prevents the FDA from outlawing cigarettes, implementing standards that are technically impossible to achieve, or reducing nicotine to levels that would effectively make them zero.

In the Oct. 11 presentation, Lynn Hull, lead pharmacologist with the FDA’s Center for Tobacco Products, said very low nicotine content (VLNC) cigarettes contain 0.2 to 0.7 mg of nicotine per cigarette. Traditional cigarettes contain 7.2 to 13.4 mg, she said. More than 96% of nicotine can be extracted, Hull said, while maintaining a product that is "subjectively rated as average in smoking characteristics."

A paper published by the National Institutes of Health said the average person ingests 1 to 2 mg per cigarette. It surmises a cigarette with 0.5 mg of nicotine would be sufficient to minimize its addictiveness.

Altria has said the levels the FDA has discussed are not technically feasible and are not supported by science. And, Altria said, a black market in higher-nicotine cigarettes would probably be created.

Not all companies would agree. Biotech 22nd Century Group (NASDAQ:XXII) maintains it already grows tobacco with up to 97% less nicotine than tobacco used in conventional cigarettes, and it has produced millions of such cigarettes, albeit solely for drug-abuse research. Those nicotine levels aren't quite low enough to meet the new regulations, but an even bigger question is whether it could scale up production to meet industry demand. In just the second quarter, Altria alone shipped over 27.2 billion cigarettes.

Last year, British American ended a partnership with 22nd Century to develop low-nicotine cigarettes in what some see as evidence that such products are not viable.

Altria says that before implementing such a standard, the FDA needs to ensure that a marketplace is established for noncombustible cigarettes, hinting at the need to approve next-generation electronic cigarettes like Philip Morris International's iQOS heated-tobacco device. If the iQOS gains FDA approval, it would be marketed in the U.S. under Altria's Marlboro brand.

The FDA's webcast may have simply been a rehash of what it already understood to be the state of the science. But the fact that it felt the need to gather up all the data again into one cohesive presentation suggests it may be ready to address a new regulation that could be fatal to the tobacco industry.

Editor's note: Portions of this article have been updated to reflect information that Hull provided in her presentation.