Despite the onslaught of e-commerce, 2018 has shown that brick-and-mortar retail is alive and well. After all, even Amazon.com has had success opening physical retail stores lately. Physical stores are not dead; investors just have to find the right retailers that can deliver positive comparable-store sales and profitability in today's competitive landscape.

Two retail candidates to survive the Amazon apocalypse are Nordstrom (NYSE:JWN) and The TJX Companies (NYSE:TJX). Both companies have been having success with their respective off-price store concepts. Let's take a look at the investment case for each to determine which one investors should buy today. 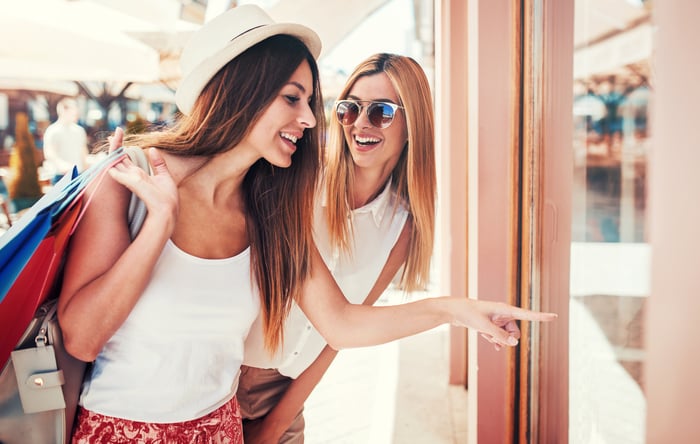 Nordstrom was founded in 1901 as a shoe store in Seattle, and today has 363 stores open in the U.S. and 9 stores in Canada. It operates 134 full-price department stores and 236 off-price Nordstrom Rack stores, with the company's largest presence on the West Coast.

As a group, department stores have been the sour apples of the retail industry lately, but thanks to superior brand positioning and investments management has made in e-commerce, Nordstrom has been able to rise above its peers.

One of the ways it's been able to do that is its growing line of off-price Nordstrom Rack stores; they've allowed Nordstrom to reach younger shoppers who can't afford some of the full-price merchandise sold in its flagship department stores.

After a few years of flattish comparable-store sales growth, Nordstrom reported sales growth of 7.1% in the second quarter, with earnings per share soaring 46% higher. Comparable-store sales were up 4%, equally balanced across Nordstrom's full-price stores and its off-price Nordstrom Rack stores. Earnings benefited from a lower tax rate and from management's focus on expanding operating margin, as part of its five-year plan to grow profit faster than the top line. Co-president Blake Nordstrom said: "We remain on track for 2018 to be an inflection point for profitable growth."

Over the next five years, management has guided for 3% to 4% sales growth. The company has spent the last several years investing heavily in e-commerce, including one of the best mobile apps in retail -- which has garnered a five-star score in Apple's App Store, out of 197,000 user reviews. (In comparison, the app for T.J.Maxx, a TJX Companies chain, has only a 2.4-star average rating.)

Additionally, Nordstrom has invested in data analytics and supply-chain operations, pressuring margins in recent years. But with these investments behind it, Wall Street analysts expect the company to grow earnings by 9.4% annually over the next five years.

TJX is the largest off-price retailer of apparel and home goods. It has 4,141 stores open worldwide, under the store brands T.J.Maxx, Marshalls, and HomeGoods. The company has a growing presence in Canada, Europe, and Australia.

Taking a look at recent performance: TJX grew sales 12% in the second quarter, with earnings per share up 38%. However, non-GAAP earnings increased 16%. Higher customer traffic drove solid comparable-sales growth of 6% across the company's segments, including Marmaxx, HomeGoods, TJX Canada, and TJX International.

TJX has perfected the off-price model for four decades. The company has only had one year in its history of negative comparable-sales growth -- that's beyond impressive, given how competitive retail is, not to mention the susceptibility of the industry to weak results during economic recessions.

Despite the company's $66 billion market cap and already large store footprint, management believes it can reach 6,100 stores long term. Wall Street analysts believe the company will grow earnings per share 11.5% annually over the next five years.

Both companies are performing well right now, and are solid retail stocks to hold for the long term. TJX has a longer history of delivering consistent results, but Nordstrom looks better equipped for mobile commerce, and its Nordstrom Rack stores are beginning to offer the same benefits to value-hunters as T.J.Maxx stores.

Both stocks pay a dividend, but Nordstrom's current yield of 2.4% is higher than TJX's yield of 1.5%. So, in addition to a cheaper forward P/E, Nordstrom also has something to offer those who like some income to go along with growing earnings.

Considering all of this, Nordstrom is the better buy for investors today.