On Oct. 26, Apple's (NASDAQ:AAPL) iPhone XR -- the cheapest of the three iPhones that the company announced during its Sept. 12 product launch event -- finally hit store shelves. Although the device doesn't include all of the bells and whistles of its pricier siblings (the iPhone XS and iPhone XS Max), it still has many of the key technologies that those devices do, such as the new wide-angle camera, Face ID support, and the crazy-fast A12 Bionic chip.

The device is also expected to be the best-selling model of the lot. One estimate from longtime Apple analyst Gene Munster indicates that the iPhone XR will make up 38% of the company's iPhone shipments during Apple's fiscal 2019 (which began on Sept. 29, 2018) -- making it, in Munster's words, "the most popular iPhone in 2019." Incidentally, Munster's predictions call for the iPhone 7 and iPhone 7 Plus devices to be the second-most-popular iPhones, capturing 28% of unit shipments. 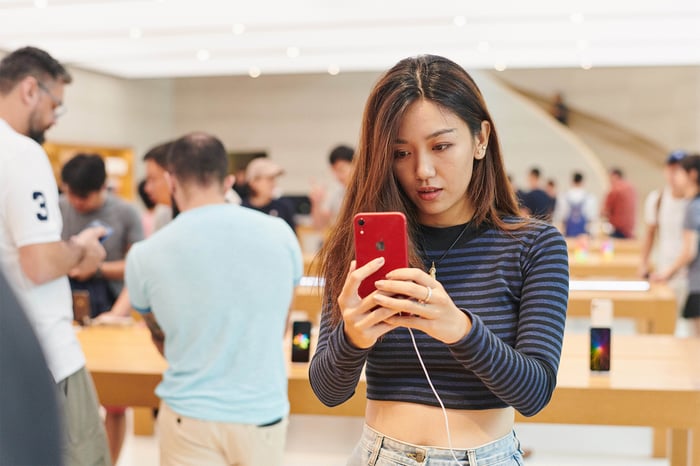 It's highly likely that Apple will release a successor to the iPhone XR next year. Here, I'd like to offer up some of my predictions around what will change with the new device and what could stay the same.

I expect Apple's next iPhone XR to incorporate the typical upgrades that we usually see with new generations of iPhones. This should mean an upgraded applications processor, a faster cellular subsystem, and a better rear-facing camera thanks to improvements in the sensor and possibly the optics, as well as the image signal processor enhancements in the new applications processor. It also wouldn't surprise me to see upgrades to the front-facing camera system, too.

In other words, the device should be better in the ways that you'd expect a new iPhone to be better.

Additionally, you'll note that Apple launched this year's iPhone XR in a broad array of color options: white, black, blue, yellow, coral, and "(PRODUCT)RED." My guess is that Apple will use the sales data of the various color options over the course of this product cycle to determine which color options should stick around for a subsequent iteration and which should be swapped out for different ones.

This year's iPhone XR was, in effect, an all-new phone, and there are aspects of the company's iPhones that it maintains for several consecutive generations. For instance, I'd imagine that Apple won't make substantive changes to the overall form factor and dimensions of the device. Apple also tends to reuse iPhone displays for at least two product generations, so don't expect any display upgrades, either.

Apple currently offers the iPhone XR in three storage configurations: 64 gigabyte (GB), 128 GB, and 256 GB. I believe the possibility that this changes will depend on what the company does with the successors to the higher-end iPhone XS and iPhone XS Max. If the next-generation versions of those phones top out at 512 GB like this year's models do, then I'd anticipate no change to the storage configurations in the successor to the iPhone XR.

Ultimately, I expect 2019 to be an "s" year for the iPhone XR -- mainly a specification bump. That's not necessarily a bad thing, though, as there will certainly be a large installed base of iPhone 6, 6s, 7, and 8 series owners that Apple will be able to target with both iPhone XR's successor as well as today's iPhone XR, which is likely to see a price reduction when the newer model launches.