EOG Resources (NYSE:EOG) has been having a great year. The country's leading shale driller has not only reported expectation-beating financial and production results through the first half of the year, but it has also boosted its dividend twice and unveiled a massive oil and gas discovery in the Powder River Basin. Because of that, expectations are high as the company gears up to report its third-quarter results later this week. Here are a couple of things to keep an eye on when reviewing that report.

EOG Resources has a knack for beating its quarterly production forecast. In the second quarter, for example, the company guided for its U.S. oil production to be between 374,000 to 382,000 barrels per day (BPD). Actual production, however, came in above the high end of that range at 384,600 BPD, which was 15% more than its output in the year-ago period. 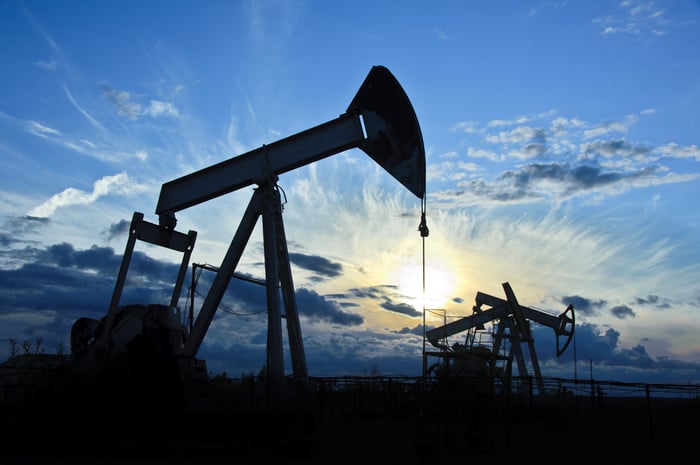 The company anticipated that production would continue expanding in the third quarter, with it guiding for its U.S. oil output to be between 401,000 to 409,000 BPD. Achieving that target would keep the company on track to meet its full-year forecast.

One area to pay the closest attention to is the company's Delaware Basin position in the Permian. Due to pipeline and service constraints in the region, many rivals have had to cut back on the number of wells they plan to complete this year. While EOG is much more proactive than most peers in locking in needed services and costs to ensure it has the resources to continue growing, that doesn't mean it's completely immune to the region's issues. That's why investors should keep an eye out for any impact that the Permian's capacity issues have on its third-quarter production.

See if it makes any changes to its 2018 plan

EOG Resources set its 2018 capital budget to range between $5.4 billion and $5.8 billion, which would give it the funds to grow its U.S. oil production by around 18%. But several things have changed since it set that budget. For one, oil prices in the U.S. have been well over $65 per barrel for much of the year, which is above the $50 per barrel that the company used to set its budget. On top of that, service and equipment costs have inflated faster than most in the industry expected this year.

Because of that, several oil companies have increased their capital budgets for 2018. ConocoPhillips (NYSE:COP), for example, initially planned to spend $5.5 billion this year. But the U.S. oil giant has boosted that budget twice this year due to service-cost inflation and unexpectedly higher activity levels from some of its drilling partners. As a result, ConocoPhillips now plans to spend $6.1 billion this year. Given that trend, investors should see if EOG makes any upward adjustments to its budget.

Another potential change to keep an eye on is for any shift in drilling activity. As noted, pipelines in the Permian Basin are near capacity, which is forcing many drillers to complete fewer wells than expected. Because of that, several larger drillers are starting to shift some of their activities to other regions, with ConocoPhillips, for example, moving a rig out of the Delaware Basin to the Eagle Ford. Given this trend, investors should see if EOG plans to shift any activity out of the Permian to one of its other regions until new pipelines come on line toward the end of next year.

EOG Resources had an excellent first half of the year, which the company anticipates will continue throughout the balance of 2018. Investors will see if that's still the case later this week when the company reports its third-quarter results. As long as the Permian Basin's current issues didn't derail the company's growth machine, then it should deliver solid results once again, setting it up for a strong finish to the year.