If your fiance leaves you at the altar, you can either view it as a devastating breakup, or take it as an opportunity to date new people and hope to find someone better. It's a matter of perspective, and mall owners have chosen to view the closure of Sears'(NASDAQ:SHLDQ) stores as a "plenty of fish in the sea" situation.

Beyond the slow death of Sears, the bankruptcies of Toys R Us and department store operator The Bon-Ton, as well as the shrinking footprints of chains such as J.C. Penney and Macy's, have compelled mall owners to change how they operate. They won't, in most cases, be able to fill each vacant department store space with a single new retail client. Instead, they'll have to get creative. But Simon Property Group (NYSE: SPG) CEO David Simon has chosen to take an optimistic view. 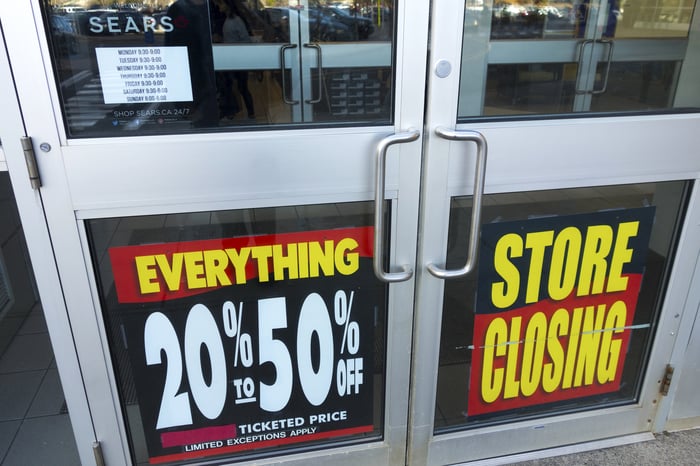 Many Sears locations are already closing and the future of the chain is in serious doubt. Image source: Getty Images.

Is it really an opportunity?

The CEO is putting a happy face on a bad situation, because his company will have no choice but to move forward without Sears filling many of its "anchor store" spaces.

There's no single approach that will fill all the mall spaces being vacated by fading department stores, but the mall operator has allocated $1 billion to redevelop the 22 Sears locations under its control that it knows for certain will close. CEO Simon wasn't specific during the call as to how those spaces will be filled, but he did give listeners a sense of how he's thinking about the problem.

"The mall of the future doesn't need five, six, three -- it depends on the mall -- but it doesn't need the department stores," he said. "And then, the ability to reclaim that allows us to densify the properties, and I think we have that opportunity in a rather large scale."

Simon has added hotels, apartments, gyms, and more smaller stores to fill many of the mall spaces formerly occupied by department stores. In addition, mid-size discount retailers including T.J. Maxx and its sister brands Marshalls and HomeGoods, along with Five Below, have been adding locations across the country.

In fact, the CEO asserted, that there's no shortage of demand for these  open retail spaces. While he acknowledged that some malls still have vacant space, finding tenants, he said, is not the problem.

Clearly, Simon Property Group would have been happier if Sears and its other long-time anchor tenants had been able to avoid their current troubles. But just as an unpleasant breakup might lead a newly single person to start getting back in shape or to work on their personal issues, these department store closures are forcing the mall owner to take a hard look at its business.

The transitions ahead won't be easy (regardless of the CEO's public positivity): Each mall will require a custom solution, and not every tactic the company tries will work. People may not flock to mall-based hotels or gyms in some markets, while they may work well in others.

Still, Simon Property Group and other mall owners should come out of this period stronger than before. Their operations won't be as reliant on department stores, and in this market -- one that's not likely to get better for old-school brick-and-mortar retailers -- that's a good thing.

Is the Death of Sears an Opportunity for Malls? @themotleyfool #stocks $SHLDQ $SPG Next Article
Current