Shares of Kellogg Company (NYSE:K) were sliding Wednesday. The decline came after the cereal and processed-foods maker cut its full-year profit outlook in its third-quarter earnings report as it makes new investments in branding and single-serve pack formats in order to counter general consumer trends against packaged foods. As a result, the stock was trading down 8.1% as of 11:20 a.m. EDT. 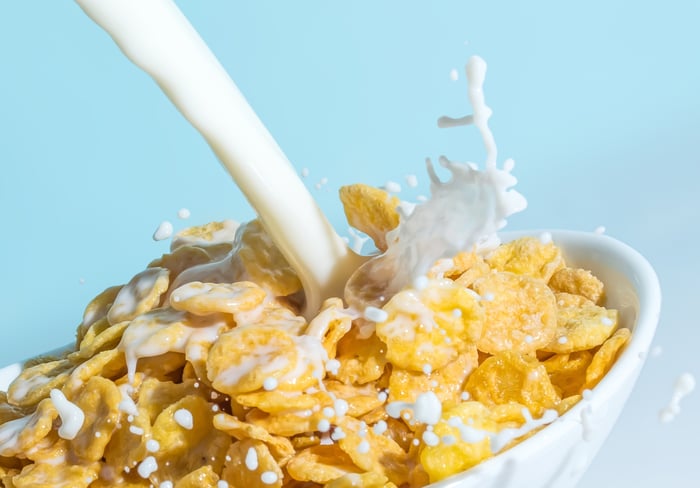 For the quarter past, Kellogg, which owns brands like Keebler, Cheez-It, and Pringles in addition to its trademark cereals, turned in organic sales growth of 0.4%, a decent result considering the general environment. Overall revenue, which includes acquisitions in the past year like RXBAR, increased 6.8% to $3.47 billion, topping estimates at $3.42 billion. On a currency-neutral basis, revenue increased 9.3%.

Gross margin slipped 220 basis points to 33.9% and adjusted operating profit fell 4% to $471 million due to increased investments in advertising and higher distribution costs. However, adjusted earnings per share ticked up from $1.03 to $1.06 in part because of a lower tax rate from tax reform, matching estimates.

CEO Steve Cahillane said: "We continue to make tangible progress under our Deploy for Growth strategy, highlighted by changes we
have made in our portfolio and investments we are making in winning occasions, building world-class brands, and
pursuing improved service and in-store execution. Despite their near-term impact on profit, we'll continue making these investments in the
fourth quarter because we know they are putting us on a path for sustainable growth over time."

The lower guidance from the normally stable Kellogg seemed to surprise investors, but making investments to drive future growth looks like the right move as the company needs to continue to adapt its business to changing tastes. Given that, I wouldn't be too concerned about today's sell-off, especially as the top-line guidance improved.