Shares of NuVasive, Inc. (NASDAQ:NUVA) were down 9.8% as of 11:58 a.m. EDT on Wednesday after the company reported disappointing Q3 earnings on Tuesday after the market closed. The spinal surgical equipment maker posted adjusted earnings per share of $0.56, which were well below Wall Street's consensus estimate of $0.62.

It's important for investors to understand why NuVasive missed analysts' earnings targets. The company made a calculated decision to ramp up spending. Research and development expenses increased 20% year over year while selling, marketing, and administrative expenses jumped more than 12% over the prior-year period. 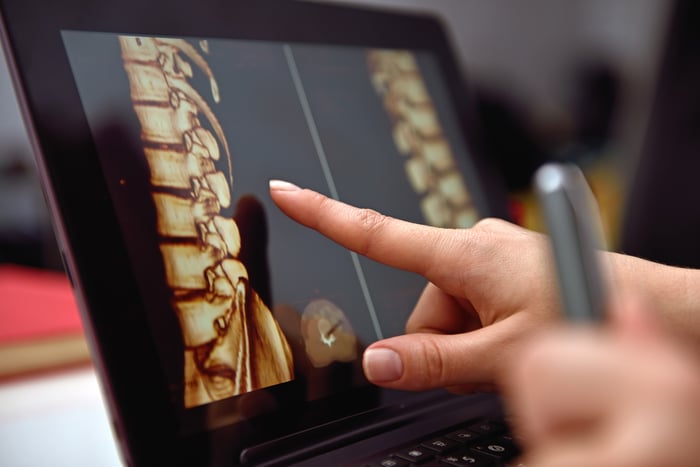 NuVasive CEO Gregory Lucier said that the company "made strategic investments this quarter on the heels of this momentum in key R&D initiatives, additions to our commercial sales force, and infrastructure upgrades to improve set fulfillment—all to support a strong start to 2019 and beyond." In other words, NuVasive opted to sacrifice some of its Q3 earnings to hopefully generate higher profits in the future.

In many ways, it's refreshing for the executives of a company to take a long-term perspective rather than a short-term view. That's usually not the case. Shareholders might not like the immediate effects of the move by NuVasive's management team's decision. However, it's actually a good thing that Lucier and his team aren't merely trying to make Wall Street happy temporarily.

What remains to be seen is whether the investments that NuVasive is making will pay off. In August, Lucier expressed optimism about the future for the company and the opportunities for its new spinal surgery products. That confidence appears to be warranted despite NuVasive's Q3 earnings miss.

The main thing for investors to watch now is how well several of NuVasive's initiatives go. The company has launched several new products recently, notably including its NuVasive Pulse surgical automation platform. It also established a partnership with Biedermann Technologies. These efforts could help boost NuVasive's sales and earnings in the not-too-distant future.