The newspaper continues to reel in new subscribers for its online products, with a beneficial impact on operating income.

The venerable Gray Lady appears to have found the pop in her stride in the back half of 2018. Investors worried that fatigue may have set in on The New York Times' (NYT -0.16%) digital subscriber growth received a pleasant surprise Thursday as the company followed through on its promise of high-teens expansion in third-quarter digital subscription revenue. Advertising and "other" revenue also contributed to a solid top-line result over the last three months: 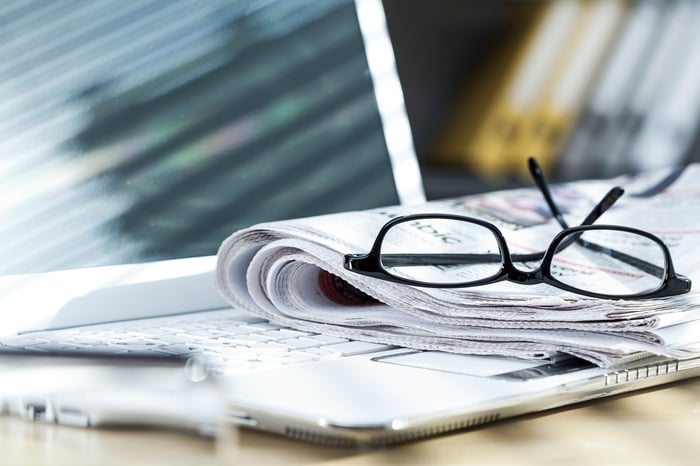 We're executing on our subscription-first strategy; this quarter, subscription revenues accounted for nearly two-thirds of the Company's revenues. We're investing aggressively in our journalism, product and marketing and are seeing tangible results in our digital growth.

...[A]s expected, we are seeing a much stronger second half of the year. We had an exceptional third quarter with digital advertising up 17 percent and growth of 7 percent in total advertising.

The final quarter of 2017 contained an extra week in comparison to the 13 weeks in the current fourth quarter of 2018. Bearing this in mind, the Times expects total fourth-quarter subscription revenue to dip into the low- to-mid-single digits against the prior year, with digital-only subscription revenue ticking up in the mid-single digits. Other revenues is again targeted for brisk growth, in the range of 40% year over year. Management anticipates that operating costs will rise in the mid-single digits due to further growth in its commercial printing operations, as well as higher marketing costs. In short, expectations for the fourth quarter conform to the model that has boosted net income by roughly 15% through the first three quarters of 2018.