Find out which of these stocks climbed on strong earnings.

The stock market powered ahead once more on Thursday, as major benchmarks put together their first three-day winning streak in quite a while. Positive earnings results and more signs of a strong job market helped to bolster sentiment among investors, and some favorable comments that suggested a potential resolution to U.S.-China trade tensions also helped to restore some confidence on Wall Street. Las Vegas Sands (LVS 0.51%), DowDuPont (DD -3.33%), and Teva Pharmaceutical Industries (TEVA -1.98%) were among the best performers on the day. Here's why they did so well.

Shares of Las Vegas Sands soared 12% after the casino resort operator got good news from one of its key markets. The latest data from the Macau Gaming Inspection and Coordination Bureau showed that monthly revenue in October reached its best level in roughly four years, picking up 2.6% from year-ago levels and suggesting that the Asian gaming capital remains healthy despite some economic turmoil in China. Other casino stocks with exposure to Macau also rose, but Sands in particular has relied on key Macau properties like its Venetian, Parisian, and Sands Cotai Central resorts to drive overall growth. After having slumped significantly, Sands' rebound reflects hopes that Macau will keep gaining upward momentum through the end of 2018 and beyond. 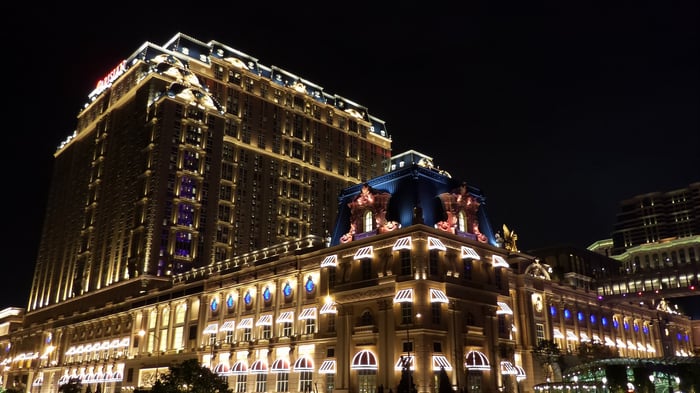 DowDuPont stock picked up 8% in the wake of the company's third-quarter financial report. The chemical giant said that it saw strong demand in its core markets, helping to push adjusted earnings per share higher by 35% from year-earlier levels. Balanced gains across most of the company's segments contributed to overall performance, and investors reacted positively to news that DowDuPont would spend $3 billion on repurchasing shares of stock over the next several months. As investors wait for the conglomerate's planned split into three separate companies, DowDuPont is working hard to keep up its forward progress.

Finally, shares of Teva Pharmaceutical Industries finished higher by 15%. At first glance, the pharmaceutical company's third-quarter results looked a bit ugly, with revenue falling 19% and adjusted net income dropping more than 30% from year-earlier levels. Yet those figures were nevertheless better than most of those following the stock had feared, and Teva also boosted its full-year 2018 guidance. Many investors see good things ahead for Teva, and despite the challenges that have resulted from the loss of patent protection for its Copaxone multiple sclerosis treatment and pricing pressure on some of its generic drugs, the pharmaceutical company has cut costs and expects to get its balance sheet a lot healthier by paying down debt in the near future.