Please ensure Javascript is enabled for purposes of website accessibility
Log In Help Join The Motley Fool
Free Article Join Over 1 Million Premium Members And Get More In-Depth Stock Guidance and Research
By Travis Hoium – Nov 1, 2018 at 11:47AM

Shares of 3D printing company Stratasys Ltd (SSYS -0.40%) jumped as much as 26.5% in trading Thursday after reporting third-quarter financial results. Shares drifted a bit lower as the day went on but were still up 19.2% at 12:20 p.m. EDT. 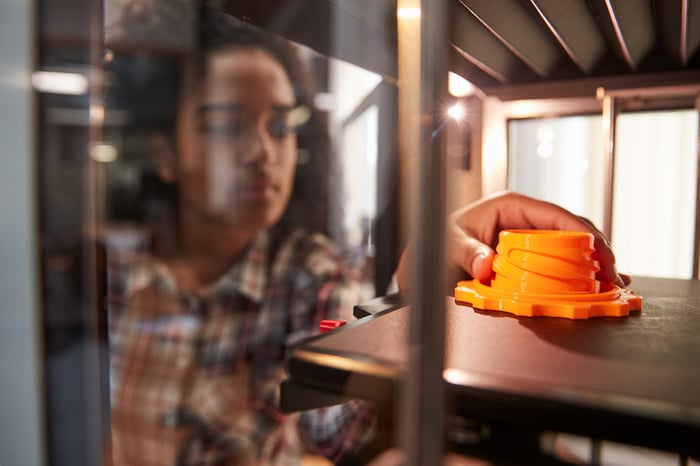 Revenue was in line with estimates, but non-GAAP earnings easily beat the $0.06 that analysts were expecting. What really had investors excited was management's revised non-GAAP net earnings guidance for the year of $27 million to $30 million, up from a previous estimate of $16 million to $27 million.

The growth and earnings beat was in stark contrast to competitor 3D Systems (DDD 1.57%), which saw shares plunge earlier this week on weaker-than-expected results. The biggest difference between the two is that Stratasys is inching toward profitability more quickly than 3D Systems is.

The fact that revenue and earnings are both improving at a rapid rate is a strong sign for Stratasys. And management's confidence to raise guidance is icing on the cake. Investors should watch for continued growth and net income improvement, but right now, it appears Stratasys is turning a critical corner back to long-term profitability.