Expenses have been volatile this year, so the long view is a must with this restaurateur.

Shares of Texas Roadhouse (TXRH -2.57%) are down again after the company reported rising sales but declining profits during the third quarter. The top and bottom lines surprised investors by heading in opposite directions over the summer months as the steakhouse chain works through rising expenses, especially for labor. That doesn't mean this stock is dead. Nevertheless, patience is required.

Summer of '18: A restaurant story

After two year's worth of declining sales, the restaurant industry turned a corner this year and has begun to rebound. Average location comparable sales are back on the rise mostly due to price hikes, despite a continued decline in average foot traffic because of overexpansion.

Against this backdrop, Texas Roadhouse has been a solid performer. The company's disciplined approach to building new restaurants, its focus on underserved rural America, and hearty portions at a value have been winning with diners. Comparable sales have been on the up-and-up for years as a result. 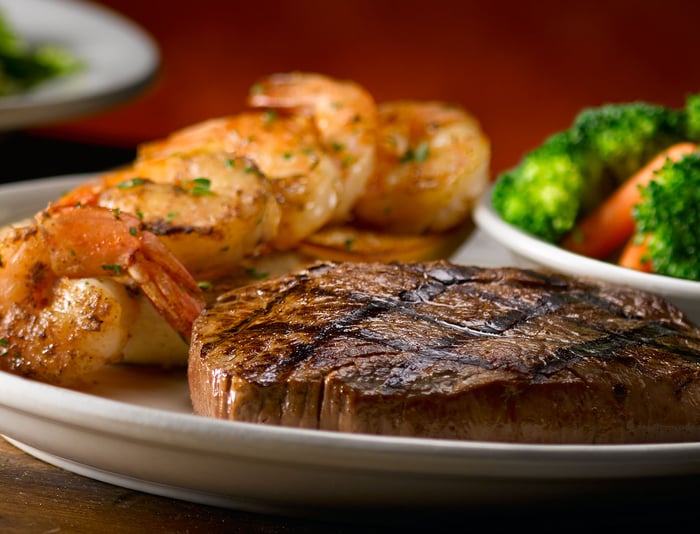 That trend continued during Texas Roadhouse's third quarter. For the three months ended Sept. 25, revenue was up 10%, primarily driven by impressive comparable sales increases -- 5.5% at company-operated locations and 4.2% at franchised locations. An extra 30 restaurants in operation compared with a year ago also helped.

However, strong growth comes with its challenges. While the restaurant industry has had rising sales this year, it's also been dealing with a new challenge: a steep rise in wages. A tight labor market, as well as minimum wage hikes in many states, has taken a bite out of the industry's profit margins.

Roadhouse hasn't been spared. Restaurant margin in the third quarter fell to 16.2% compared with 17.8% during the 2017 comparable period. That led to earnings of $0.40 per share, a 7% drop from 12 months ago. Here's a breakdown of the expense increases that weighed profits down.

The story in context

2017 was always going to be tough to lap. Profits were up sharply from strong traffic growth, cost of food actually fell for most of the year (compared with about 1% inflation this year), and labor costs increased only by high single digits.

With the cost of food and commodities back on the rise, minimum-wage hikes kicking in over the summer, Roadhouse raising its base pay for managing partners, and higher insurance expense, it's understandable why the bottom line suffered in Q3.

Management said mid-single-digit increases in labor expense should persist into the fourth quarter, as will about 1% food and commodity inflation into 2019. However, those rising costs have been in place all year, and Roadhouse has managed to smooth out some of the hikes in the third quarter with performance to-date. Plus, management said comparable sales in October were up another 4%.

Bearing that in mind, this restaurant chain is down, but it certainly isn't out. Nevertheless, with some expense headwinds working against strong comparable-store sales, expect earnings increases to be a bit more modest for the foreseeable future.